Abzu, Apsu or Apzu is the main antagonist of the 1st season of Saint Seiya Ω. Medea and Pisces Amor prey on Pegasus Kōga to awaken Abzu, their true master.

Ludwig, now Mars, leads a battle against Athena and her Saints. His Four Heavenly Kings were defeated by Athena, and he finds himself in trouble against Seiya. Medea, who was in the Darkness Ruins, prayed for Abzu, God of Darkness to come to their rescue. A dark meteor then left a pile of Darkness floating in the cosmo and crashed on Earth. Saori tries somehow to contain it, and save two babies, Kōga and Aria. However, Athena Cloth crack and the meteorite is powered by a strange energy boost, Athena couldn't do anything to stop it and the star explodes against the surface. Darkness sprung up not only in Mars, but in Kōga too. Saori saves Kōga by infusing her light into him. However, Mars trimmed armor changed by Darkness, and takes the opportunity to leave with Aria.

The battle of Sanctuary have passed and the destruction of Earth has begun. Kōga and Eden confront Amor on Planet Mars, and manages to capture Koga and stole his darkness and insert in to the Galaxy Mail, concentrate of Darkness who had grown up in Mars. But Kōga does not succumb to darkness and uses this apparent resurgence of power to stand up to Amor. Their fight takes them near the tree where Saori is a prisoner, and an illusion of Medea was quick to sink the Saint in despair thinking that Saori died before his eyes. The Dark Cosmo within Kōga wins unprecedented intensity and it can no longer repress. Darkness envelops his Cloth and body consciousness fades and Abzu takes possession of the Koga body.

Amor was faced with the arrival of the God of Darkness. The God of Darkness falls suddenly upon Amor and pierces his belly with a single punch suffused with dark energy. Amor crashing against a rock and has his last breath, still amazed to have been defeated so easily.

Koga Companions equally surprised by the turn of events, then notice Abzu now seems to moving towards Athena, and so they rush to this disturbing god to stop it. Their efforts proved fruitless, however, and Abzu inflicting serious injury with his Dark Cosmo. While all are on the ground and Abzu reached Athena, a last hope lies in the way of Abzu is Eden. Eden then attack Abzu head on. He fired some moves on Abzu but it didn't work. Eden got the upper hand and attacked Abzu. Abzu the whole time was enjoying it. Eden no impresses used Orion Devastation but Abzu used Pegasus Sui Sei Ken and Eden was hit. Koga's friends try to fight Abzu but they were corrupted. Eden came back and used aria's staff but Abzu manifested himself and killed Medea and then destroyed the staff. He kept walking then when he was near Athena he gave a evil smile.

Abzu decides to kill Athena flying to the tree, where Athena  is trapped, Athena tries without any results that Kōga is released from the possession of the god of Darkness, Abzu decides to end it all at once, but Seiya appears determined to face Abzu the god of darkness, shows superiority to a contaminated Seiya ,but Yuna activates its seventh sense to stop Kōga, host of Abzu, Seiya decides to fight alongside Yuna  to stop Abzu, but  Abzu continues to demonstrate superiority against contaminated Saint, but Seiya manages to hit causing Abzu to eat losing control of his guest, Yuna ends freeing Kōga from Abzu control, then Abzu kidnaps in darkness to Athena.

Koga wakes up and realizes the wounds that caused his peers and that Athena has been kidnapped by Abzu. Seiya lends his Sagittarius Cloth and enters the dark world of Abzu. At the temple of darkness which is a battle starts between them, Abzu try that Koga is again dominated by its dark nature, even revealed to even revealed to be the son of his darkness. Koga begins to be dominated but remembering his mission and continues the battle, realizes that Athena already is very exhausted and he needs to save her as soon possible.

Abzu does hurt Kōga to subdue him and force him to give in to the darkness, no clutch he refuses and turns his cosmos, his friends, realizing that Koga is determined to destroy Abzu, send their cosmo, fire, wind, earth , water and thunder, which Koga manages to free Athena and give it to Seiya, while he continues the battle.

Finally Koga is aided by the Staff of Aria that appears to help ignite the limit his cosmo of light and at the same time light affects and weakens in part to god, is well as manages is well as manages to destroy to Abzu and his temple. the planet Mars when not counting more with the cosmo of Abzu, loses cosmo that had taken of Earth which returns to normal with the different timeline (except for some events)...

Abzu is an immensely powerful god whose power surpasses Mars, and is possibly even stronger than the 12 Olympian Gods, based on his ability to do extensive damage to the Athena Cloth (a Kamui), including shattering its helmet and producing large cracks on the other parts of the cloth. Abzu can manipulate darkness to the point where he can inflict dark wounds on any users of cosmos (eg. saints and Athena herself) and use Rubell Sidus Grungir. Apparently he could copy Pegasus' Ryu Sei Ken as well as Sui Sei Ken and spread it on an attack to make an explosion. He could destroy attacks and manifest a shadow version of himself to destroy Aria's staff and is also responsible for the universe's destruction, implying that he is strong enough to destroy the universe. It was revealed that Abzu was the creator not only of the Earth, but possibly of the entire Universe, and it is also implied that he killed the other Olympian Gods (except Hades, who was dead at the hands of Athena) before being summoned by Medea to the Earth. 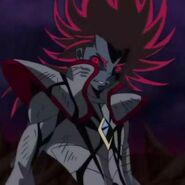 Retrieved from "https://saintseiya.fandom.com/wiki/Abzu?oldid=54584"
Community content is available under CC-BY-SA unless otherwise noted.