Odin (Initially)
Loki (under his control)

Andreas Lise is the central antagonist in Saint Seiya: Soul of Gold. Initially, he was the doctor at Valhalla Palace, but Andreas was possessed by the false god Loki.

Initially, Andreas is kind, gentle and caring, however, when he was possessed by Loki, Andreas was gradually changing, to be completely the opposite his own nature cruel, coldness and evil.

During the holy war between Athena, the goddess of wisdom and war against Hades, god of the underworld, Loki the evil god awoke, possessing Andreas Lise. Loki's ambitions to take control of the Earth were frustrated by the Norse god Odin, as the great god of Asgard was the only one that prevented succeed with his plans. Odin had the powers and forces to stop Loki, because the false god had been unable to regain his powers. In order to defeat Odin, Loki revived the forbidden tree, Yggdrasil, in order to obtain great Asgard weapon. 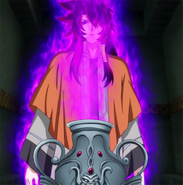 Retrieved from "https://saintseiya.fandom.com/wiki/Andreas_Lise?oldid=54073"
Community content is available under CC-BY-SA unless otherwise noted.