Andromeda Shun is The legendary Andromeda Bronze Saint, who fought alongside Sagittarius Seiya to protect Athena from fearsome foes, years ago. Shun can use the element of Wind.

After a period of peace, in Mars showed and attacked Athena . Shun protect the latter returned with his companions Seiya , Hyoga , Shiryu and Ikki . In addition to the God of War, the Saints had to Legendary measure the bodyguard of the latter, the Four Heavenly Kings , shun and hyoga faced Diana . While Mars seemed to be on the verge of losing a meteorite crashed into Earth, releasing a power that changed the appearance of Cloths and housed them in Clostones , giving the Saints and Martians control elements .

Hostilities ended on this event, but a second war followed quickly: Mars went to attack Saori directly Sanctuary and released his Darkness on it: Shun and his companions intervened by shield with their bodies, and each received a wound of Darkness. The latter prevents therefore ignite their Cosmos in danger it would spread to the whole body and kills them.

Shun makes his reappearance after rescuing Dragon Ryuho and Pegasus Koga in the desert from a Silver Saint. Now having his Cosmo sealed he goes around healing in small towns for free. He helps Pegasus Kōga, Aquila Yuna and Lionet Sōma in their fight against Silver Saint Hound Miguel. The latter flees to the appearance of Shun and realization as to who he is. However, the Silver Saint returns, remembering that Shun, who was inflicted with Brands of Darkness in the Second Battle Against Mars, cannot burn his Cosmo or don his Cloth. Nevertheless, Shun momentarily burns his Cosmo and attacks the Silver Saint with his Nebula Chain technique, wounding him enough for Ryuho and Koga to finish him off. Shun then bids farewell to Kouga stating that his Light Cosmo is their new hope.

From the previous conflict, Shun seems to reside in poor areas where small isolated villages. As legendary Saint, it is also sought out by the Sanctuary that Pallasites , though with very different purposes. When his enemies leave the area, Andromeda Shun goes to meet Yuna,Ryuho and Souma .

Shun appears with Shiryū and Cygnus Hyōga (Omega) in front of Pallas Belda.

saving the young bronze saint from a defeat at the end of a large number of Pallasites.After the breaking of the time portal, Shun and his friends enter the fortress of Pallas. Shiryu and the other Saints enter the castle and meet with Europe. Europe warns that there are four cumin to follow and only one will carry Pallas. Shun,Koga,Souma and Yuna, enter first path.

Kouga had another encouter with europe who mocked the saints and left. Kouga teamed up with souma and yuna to defeat mystic stone surt in one of the gates. They had a hard until adromeda shun came helped out. Shun revealed that only things without cosmo could go in surt's barrier. Souma and yuna did a combo while shun use his chain to send kouga to the barrier. Kouga depowered himself to get in and punched surt. Surt was then defeated by shun

Koga, Souma, Yuna, and Shun encounter the Pallasite First Class Aegaeon who wants to test the Bronze Saints' powers himself. After telling the Saints about how Ikki put his life on the line to crack Aegaeon's sword, Shun has a hard time fighting him until Koga, Souma, and Yuna keep fighting the Pallasite, defending Shun. Burning his Cosmo to the maximum, Koga manages to give Aegaeon a crack to his sword, before Ikki arrives to save the Bronze Saints, taking over the battle. Ikki fights Aegaeon while Koga, Souma, Yuna, and Shun keep moving onward. During the battle, Ikki and Aegaeon sustain grievous wounds.

A little later, Shun and Hyoga feel deaths Shiryu, Kiki and Fudo face Hyperion. Shortly after, they continue Europe, but it manages to escape them, leaving them to face Mira. Most of the confrontation seems to unfold off-screen, the fact remains that Shun is able to control the Pallasite through its Great Capture. However, when the god of Time Saturn is back, Mira falls mask and teleports to his true master. Hyoga and Shun however manage to regain its track and at the same time that of Europe.

Harbinger and Titan steel themselves to defend Pallas and Athena when Europa and Mira return to dispose of the goddesses, but Shun and Hyōga appear to fight in their place.At the beginning of the fight, Europe proclaims the continuing disappearance of the time in the world, against the overwhelming power of Saturn, even though there are those who still oppose. Along with Mira, he threatens to take the life of Pallas and Athena since combalidas and exhausted, hear, however, the fierce resistance of the legendary Saints.

Shun throws his chain towards Europe, which continues to deviate. Cheeky as always, Europe says that if Shun kill the two deities, he will become a companion of killers gods. A short time sufficed to take advantage of a distraction from Shun, hitting them with his Destructive Slash, mocking the apparent weakness of the legendary Saints.

When launching their deadly chakrams, Europe takes a step, looks down and sees the air currents created around His legs - it is indeed the current Nebula created Shun cosmo. A move of the opponent would be fatal to smash it, but Shun also want to prevent the conduct of combat. Mira was going to continue the fight, but held by Hyoga Absolute Zero, succumbs before the coup Diamond Dust. Europe tries a new attack, but his Chronotector was destroyed by the power of the Nebula Storm.

Still, Europe is aware of the telling blow Shun, gathers strength to get up and try to strike a mortal blow at the two goddesses. Titan comes into action, which, enraged by the betrayal of former subordinate, and full of zeal for their goddess, can raise one last time Titan cosmo, creating a powerful and deadly Gigantic Planet End. Europe, before the imminent defeat, still trying to bargain a solution with Titan, proposing to intercede with Saturn for the dominance of half the world to Pallas. The effort is futile as it is hit by the stroke of Titan, which makes it go away completely.

Shun and other Saints while feeling the fading cosmo of the bronze saints. Saturn uses the Chrono Eternal Conclusion that freezes the whole time the inhabitants of the Earth.When all seems lost, Athena gathers the Cosmo of all the other Saints to restore Kouga, who rises again as the ultimate Omega Saint, determined to stop the God of Time once and for all.

After Koga's clash against Saturn, peace is established as the humans begin to rebuild everything after the War.

From the previous conflict , Shun seems to reside in poor areas where small isolated villages. As legendary Saint , it is also sought out by the Sanctuary that Pallasites , however with very different purposes.

Despite his determination , Shun only repel attacks multiple enemies. In doing so, many are victims of Chrono Delayed . Among them is the brother of Ray , the child that Shun collected . The latter also gathered around him many survivors . To protect all as they are, Shun refuses to leave the area. Some time later , Shun feels the Cosmo Kōga , Ryuho and Subaru , while looking for her. Once the reunion made, Shun invites young Saints home and learns what is the current situation.

During the night , Ray grabs the Andromeda Clostone return to the Halimède. Shun agrees to be beaten to death by the Pallasite in exchange for the return of the brother of the child. However, remorseful , Ray apologizes and makes the precious crystal to its owner. To honor his trust, Shun burned his Cosmos and thus gains a New Cloth . Finally, Halimède is defeated by the Nebula Storm. Ray Brother then comes back to life . But Shun mission around is not over yet . In doing so, Koga and his friends leave the area , leaving the protection of its people in the care of Shun . 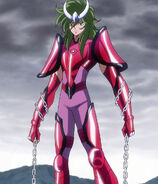 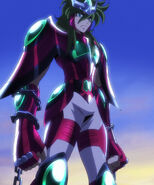 Shun in his New Cloth
Add a photo to this gallery
Retrieved from "https://saintseiya.fandom.com/wiki/Andromeda_Shun_(Omega)?oldid=51759"
Community content is available under CC-BY-SA unless otherwise noted.