Apollo (アポロン, Yuuhi no Kami Aporon) is one of the antagonist deities featured in the universe of Saint Seiya, authored by Masami Kurumada, that was later adapted to Anime. He was created by Kurumada based on the mythological persona of the same name.

Phoebus Abel (太陽神フォェボス・アベル, Taiyō-shin Foebosu Aberu) is the epithet (Greek nickname) of Apollo. He seeks to find his sister's latest incarnation and bring her back with him, in addition intending to obliterate the Earth. He appears as the main antagonist of the movie Saint Seiya: Legend of Crimson Youth.

It is implied that, as in Greek mythology, he is the god of the sun, archery, healing, truth, light and bringer of plague, and brother of Artemis, goddess of the moon. In Kurumada's mythos, he is also brother to the goddess Athena.

To date, he has only appeared in the only one out of the five Saint Seiya theatrical releases that holds a canonical status: Saint Seiya TenKaiHen Josou Overture, as it follows the author Masami Kurumada's true chronology and manga plot. Not much has been revealed about Apollo, and even though he is a canonical character, he has never appeared in Kurumada's manga.

In early interviews about the eventual Heaven chapter of his manga, Kurumada stated that he wanted the Olympic Pantheon from Greek mythology to make an appearance, once he had finished the Hades arc. He wanted to introduce 12 divinities, to use both as antagonist or allies to Athena's Saints. Apollo was one of the gods he wanted to use, as well as Zeus, king of the Greek gods, whom he drew in an early conceptual sketch published in the Saint Seiya Encyclopedia.

At first, Kurumada wanted to publish the Heaven Chapter in manga form, written and drawn by him, as the fourth act of his popular comic Saint Seiya, but later, he decided to present the project in OVA format, beginning with a movie that would serve as opening for the Chapter(hence the name Overture), and continue the story with the progressive release of OVAs. He authored the script that was used for the fifth Saint Seiya movie, TenKaiHen Josou Overture, that would be the start of the Heaven Chapter, thus, it became the only one of the theatrical releases of the series to be granted a canonical status. In Overture, Apollo plays an important role, although he appears only at the final moments of the movie.

Unfortunately, Kurumada and Toei Animation (producer company of the anime adaptation and the movies of Saint Seiya) had discrepancies regarding the script, because the Heaven Chapter started right after the death of Hades, and those critical points of Kurumada's manga (the Hades arc of the manga was still unfinished in the anime, the finding of Seiya's sister Seika, the death of Hades, to name a few) had yet to be reached by the anime adaptation, and thus Toei thought changes to the script were needed to be made, to make the movie understandable to audiences familiarized more with the anime adaptation than Kurumada's published manga. Kurumada was unhappy with the results and the Heaven Chapter project fell apart, so Apollo's participation in the Saint Seiya universe was cut short, until Kurumada decides to retake the project of publishing his Heaven Chapter, this time, in manga form, as he afterward realized it to be the best choice.

Abel returns to the Earth to find Athena, now living as Kido Saori. Despite their reunion, Saori discovers that Abel has returned to the Earth to punish mankind, whom he feels have polluted the Earth. Shockingly, Saori agrees with that decision and departs with her brother. The Corona Saints, Abel's followers, inform the Bronze Saints that their services to Athena are no longer required. These new Saints also resurrect the fallen Gold Saints, whom swear allegience to Abel as well. In spite of their disbelief, Saori reinterates her wish that Seiya and the other Bronze Saints should not fight anymore and that to disobey that order will be consider treason. Seiya especially is angry over this turn of events.

Saori and Abel enjoy their time together in the Corona Temple. However, Saori reveals her true intentions of protecting the human race and declares herself an enemy to her brother. On learning this, Abel easily puts Saori's life to an end; but he seems sad after doing it. All Saints feel this tragic event through their Cosmos. Only Capricorn Shura and Aquarius Camus of the Gold Saints try to avenge the death of their Goddess, but they die at the hands of the Corona Saints (the rest of the Gold Saints remain loyal to Abel).

The Bronze Saints arrive at the Corona Temple to defeat Abel. Seiya goes directly to Dignity Hill, but he is easily defeated by Carina Atlas. The other Bronze Saints find the revived Gold Saints waiting and fight against them. After the defeat of the Gold Saints, the rest of the Corona Saints launch a counterattack.

Hyōga is able to make his way to the Corona Temple and finds Abel, who is willing to spare him, on the condition that Hyōga builds an ice coffin for Saori. Hyōga refuses and fights Coma Berenice Berenike, but the Cygnus Saint is outmatched. Although wounded, Hyōga remembers his mother, which inspires him to amplify his Cosmo and defeat Berenike. Injured but still alive, Shiryū, Shun and Ikki also arrive at Abel's lair.

In spite of Abel's efforts, the Bronze Saints reach the Corona Temple, but all are defeated by Atlas. However, Seiya ignites his cosmos to the maximum level, Shiryū and Hyōga follow him and gain the Gold Cloths of Sagittarius, Libra and Aquarius, in accordance with their zodiac signs. With this new cosmos level, in a combined attack, they manage to defeat Atlas, but are not able to defeat Abel when the god engages them in battle. In their eagerness to save Saori, the Saints raise their cosmos and interrupt Abel's, which guided Athena to Elysion. Saori revives and faces Abel. Sagittarius Seiya gathers everyone's Cosmo and concentrates it in a golden arrow that he shoots at Abel. The god is unable to stop it, and he feels respect for Seiya. Abel is killed by Seiya's arrow, and his temple is destroyed. 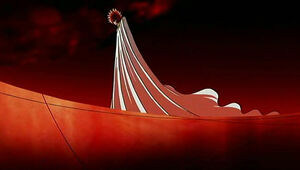 Apollo is a character created by Masami Kurumada, and as such, holds a canonical status, despite the obstacles the publishing of the Heaven Chapter encountered. He was the seventh Greek deity introduced by Kurumada in the universe of his manga Saint Seiya, and so far one of the most powerful, as stated by Athena herself. As his Greek mythology counterpart, Apollo is a tall, extremely beautiful young man, whose hair represents the flames of the sun, who seems serene as well as intimidating, and speaks with a deep voice.

Apollo appears in the final moments of the TenKaiHen Josou Overture movie, as Pegasus Saint Seiya desperately tries to save Athena from being killed by her sister Artemis, who wanted to seize the domain of Earth, and kill her younger sister, for considering her weak and unworthy of being a deity, for her deeds on favor of the humans, who had gone as far as challenging and defeating the gods.

Apollo appears as Seiya launches his attack on Artemis. His arrival at the scene is received with horror by Athena, who immediately warns Seiya to refrain from attacking him, since his human abilities, and even hers, were dwarfed in an immeasurable way next to Apollo's, and thus, the only result of daring to attack him would be certain death.

Apollo then approaches his younger sister Athena and considering the fact she and her Saints have opposed fellow Olympian deities in the past, and defeated them, namely Poseidon and Hades, decides, in the same way as his sister Artemis, that Athena is no longer worthy of being a deity, and passes judgment on her and her Saints, sentencing them to death, for the unspeakable crime of raising their hands against the gods. 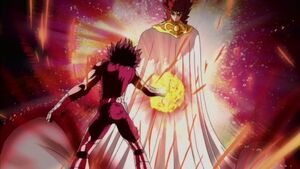 In the moment Apollo was about to consummate his sentence, he is stopped by Seiya. Apollo then states that humans have no right to existence, because of their rebellion against the gods, and have to be eradicated. Never hesitating to risk his life for the goddess he so devotedly serves, the Pegasus Saint states that maybe humans have done wrong, but there is still hope for them, gods have to tolerate them with tenderness, and give them guidance, for that is the reason why gods were granted immeasurable power. Noticing that Apollo disagrees, and is determined to begin human eradication with his death and Saori's, Seiya makes his Cosmo ablaze up to the limit, and stops Apollo's energy blast. With his full power, Seiya then launches a powerful attack on the seemingly invincible deity.

Afterward, in a rather confusing twist of the movie plot, Seiya and Saori are returned to the starting point of the movie, with seemingly no memories of the events occurred, and apparently having never known each other. Kurumada explained that Seiya and Saori lost their memories, because of Apollo's doing, who, although at first he seemed like a cruel antagonist deity was, in truth, a benevolent and caring superior being, who moved by Athena's love for mankind, and Seiya's words and courage, decided that it would be best for him to forget everything related to his life as a Saint, and free him of his loyalty to Athena, and after all the battles he has fought during millennium in his subsequent incarnations, allow him to live a normal life, at long last. Kurumada also stated these events would have been explained in detail in the following OVAs had the project been successful, though it is unclear if Seiya's memory loss was contained in Kurumada's original script, or it was one of the changes Toei Animation made.

Because of the cancellation of the Heaven Chapter animated project, the aftermath of Seiya's and Apollo's encounter, and the events taking place after it, have yet to be revealed by Masami Kurumada.

In the TenKaiHen Josou Overture Movie, Apollo has been seen as extremely powerful and enough that Athena and Artemis would be panicked by his arrival, although his attacks are somewhat blocked by Seiya they eventually overpower him throughout their battle. He used his powers to even destroy the Pegasus Cloth, burning away everything that protected Athena and Seiya, if not for their own Cosmo.

Apollo has also shown power in Teleportation, Memory erasure to the extent he erased both Saori Kido's (Athena) and Seiya's memories, to the state in which they knew not each other nor what had transpired as Goddess and Saint, respectively.

Although not officially seen within the Manga or in the TenKaiHen Josou Overture Movie, it can be seen that as a major Olympian Deity he has his own Kamui.

Description of Apollo in his Kamui.

Between Fiction and Mythology