The Aquarius Cloth is based on the myth of Ganymede, a beautiful Trojan prince. Zeus fell in love with the boy, took the form of an eagle and carried him to Mount Olympus, to be the cup bearer (water bearer) of the gods, granting Ganymede immortality.

Camus trained to be a Saint in Siberia by an unknown master. The cloth was likely kept in the Sanctuary until a Saint worthy of wearing it was found. During The Lost Canvas, Degel was the Saint who received the Aquarius Gold Cloth. Camus first appeared in volume 8 of the manga, in which he caused a seaquake that sent Hyoga's mother's resting place into the bottom of the sea. Camus attempted to spare his student from a fight, but in the end, Camus died fighting Hyoga, who surpassed him by reaching Absolute Zero. During the Poseidon Arc, the Cloth aided to Hyoga, protecting him during the fight against Poseidon. Camus's next appearance was on the Sanctuary along with Shura and Saga during the Hades Arc, wearing Surplice replicas of their originals Gold Cloths in a ploy to help Athena fight Hades. The Cloth returns in the land of the dead along with the other Gold Saints, who combine their power into a single attack to destroy the Wall of Lamentations, which ended up killing him along with all of the Gold Saints.

Degel was the guardian of the eleventh Temple on the Sanctuary in The Lost Canvas. His notable feat during the series was his quest to obtain the Orichalcum to use in their ship to sail to the Lost Canvas. In the course of the journey, he is forced to fight two old friends, and sacrifices his life to seal Poseidon's power in his own realm, entrusting the precious metal to his formerly turned ally.

The Aquarius Gold Cloth, while having all of the strength and endurance of a Gold Cloth, has no special traits that make it stand out as a cloth. However, the cloth has a long history of being used by Saints with a mastery over Cold and the ability to Freeze anyone and anything down to its last molecule. The known exception to this theme is the cloth's time of use by Aquarius Tokisada, who used his mastery over time and space in battle instead.

Between Camus and Degel, four major techniques are used during the various series. 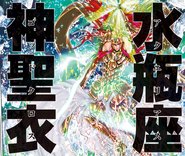 Add a photo to this gallery
Retrieved from "https://saintseiya.fandom.com/wiki/Aquarius_Cloth?oldid=51879"
Community content is available under CC-BY-SA unless otherwise noted.