Aquarius Tokisada (水瓶座（アクエリアス）の時貞, Akueriasu no Tokisada) is the Gold Saint of the Aquarius constellation in Saint Seiya Omega. He is the guardian of the Eleventh Temple. A man with command over time, Tokisada conceals his features behind a mask, and pursued and battled Yoshitomi years ago. He received the Aquarius Gold Cloth from Medea after he pledged his allegiance to Mars. Tokisada governing the eternity and the time. He can use the element of water.

When the Bronze Saints are going through the stairs that connect the Virgo House to Libra House , new Gold Saint, Aquarius Tokisada, who Haruto immediate pins down as the Silver Saint that killed his brother, standing outside the Virgo House. He officially introduces himself, and, his voice does quite match his appearance. On top of this, the Aquarius Gold Cloth seems to be one that is sentient and demands obedience from its wearer until it decides the wearer is worthy of the cloth. Tokisada is fine with this, as it raises his powers immensely. As for his abilities, Koga and other certainly appear to be screwed, as Tokisada has mastery over time itself. He slows their movements to the point where they can't even react to his hits in time, even when Koga goes after him and tries to hit him at the speed of light. Koga continues to fight Aquarius Cloth demanding that Tokisada finish off the young Saints, which he complies with, shooting a mass of energy their way. Koga intercepts it, trying to fend it off on his own, but as Tokisada puts a bit more strength is put into his attack, Kouga is thrown back off the endless stairway, leaving him to his demise as the others look on in void, only to be teleported away in midair. Everyone else, including Tokisada, have the same done to them, and they find themselves in Libra's territory.

While Tokisada easily takes over, the Bronze Saints and their opponent are teleported to the seventh house by Genbu, the Libra gold saint. Libra Genbu as a Saint loyal to Athena challenges Tokisada to a fight. The fight begins and Genbu counter reaches Jikan Ken Aquarius. The two adversaries increase their cosmos is hard but Tokisada bullied by the Saint of Libra. However, he uses the Jikan Gyakkō to repair the damage and the fight resumes.Tokisada wants to finish, it reuses the Jinkan Ken then Chrono Execution Genbu but still manages to get rid of. Aquarius Cloth then forces Tokisada to reiterate its ultimate attack exhausted, but Genbu defeats him with his ​​Rozan Shō Ten Ha. The fight ends.

At the behest of Medea, Tokisada teleports to Confines of Time (時間の果て), place that he said would be impossible to escape unless it was created a Big Bang. Early in the battle against Haruto and Ryuho, Tokisada thought would not be able to burn your Cosmo, but soon realizes that his energy was renewed and still can control the weather. So far a great advantage in the fight with Ryuho already placed hors de combat, Tokisada scenario sees the move against him after Haruto awaken the Seventh Sense, inspired by a desire for revenge since the death of his friend Yoshitomi. Angrily, Tokisada begins to suck the life and youth of all present in the Confines of Time as a last resort, even himself. Before he can complete his plan, he is eliminated by a final blow from Haruto, who escapes the Ends of Time alongside Ryuho after the intervention of Libra Genbu and the weapons of Libra.

Aquarius Tokisada Settei.
Add a photo to this gallery

The end of time 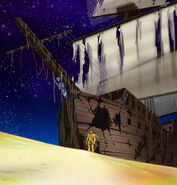 Retrieved from "https://saintseiya.fandom.com/wiki/Aquarius_Tokisada?oldid=50858"
Community content is available under CC-BY-SA unless otherwise noted.