Goddess of War and Wisdom

Athena (Greek Attic: Αθηνά), is the Goddess of War and Wisdom. She has protected the peace and love of the earth since mythological times, with the help of her many Saints.

Athena was one of the 12 gods of Olympus, and the firstborn daughter of Zeus, their king. She inherited the earth from her father, and since then, has fought to protect humanity. When the first Holy War against Poseidon (Athena's uncle and god of the seas) for control of Earth began, Athena, with the help of the inhabitants of the continent of Mu, selected warriors who fought for peace and hope, and created special armor, Cloth, for them, made with Oricale.

These Cloths symbolized the constellations and were worn by these chosen warriors, protecting them and enhancing their ability to manipulate their Cosmos. The Cloth were classified into three types: Gold, Silver and Bronze Cloth. The ones who were chosen to wear them became the first Saints.

As Athena hated weapons, such as swords, none of her Saints use them, except in extraordinary situations. In these situations, the Libra Cloth carries the equipment that will be needed. After the victory against Poseidon, Athena sealed the god's spirit in the Arctic and appointed some of her Saints to protect the seal. These Saints eventually became the guardians of Poseidon's spirit, forming the Marina Generals.

Seven generations after the first Holy War, a shrine was erected in her name to protect her, Sanctuary, situated near present-day Athens, and from her quarters, protected by Twelve Zodiac Shrines, she commands the Saints through her personal intermediary, the Pope. It was also here that Athena's God Cloth was kept when not in use.

When the shrine was completed, a new Holy War began, this time against the Giants (Gigas). This battle was called the Gigantomachy. During the war, for reasons unknown, the continent of Mu was destroyed and sank into the sea. Thus, the production of Cloth ceased, and knowledge of how to restore and repair them was restricted to the descendants of the people of Mu (the Gold Saint Aries Mū being one of these descendants).

After the war against the Giants, Athena had to face the malevolent god of war, her brother Ares. This most terrible battle forced Athena, for the first and only time, to allow the Libra Cloth to use weaponry in battle. With this help, the Saints managed to reverse their impending defeat and win. After the terrible war with Ares came yet another Holy War, against Hades (Athena's eldest uncle and god of the Underworld) and his Specters. Athena once again emerged victorious from the confrontation. However, unlike her other adversaries, Hades had not given up; his body went into dormancy and since then, every 243 years, his spirit takes possession of the purest human being on Earth and begins a new war against Athena. Unlike other gods who use human bodies as vessels for their spirit, Athena is instead actually born as a mortal girl underneath her statue in Sanctuary every 200 years, to lead the Saints in their next Holy War and to protect the Earth from danger. In the twentieth century, she was reborn as Kido Saori. As Saori, she faced various dangers and gods, in addition to the betrayal of several of her Saints, the attempt of Poseidon (possessing Julian Solo) to eradicate humanity, and the last Holy War against Hades and his army. 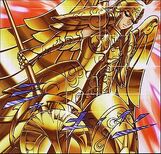 Nike Staff - The Goddess of Victory

Athena as a baby.
Community content is available under CC-BY-SA unless otherwise noted.