Seiyapedia
Register
Don't have an account?
Sign In
Advertisement
in: Locations that first appeared in Saint Seiya, Training Places, Locations in Greece

Athena's Sanctuary (アテナの, Atena no Sankuchyuari) is the residence of Athena, as well as the headquarters of her saints.

The sanctuary is located in the outskirts of Athens (whose matron was, in ancient times, Athena), even possessing secret entrances in certain parts of the city.[1] Although some ruins of the sanctuary are opened to the public[2], most of it is located within a dangerous mountain range, which cannot be crossed by average humans.

The absolute commander of the sanctuary is the reincarnation of Athena, however, such incarnations only appear on Earth at every two centuries or so (whenever the god Hades and his evil stars awake). Therefore, a human representative, known as Pope, is chosen among the saints to lead them between the eras. Under the Pope, there are the 12 Gold Saints, who act as generals to Athena's army, leading the soldiers and lower-ranked saints into battle. Some Silver Saints are given command over units of their own rank, Bronze Saints or soldiers, but they must prove to be good leaders.

The main objective of the sanctuary's existence (and the reason that humans allied with Athena) is to protect humanity and the world from divine forces that want to destroy or conquer it. Athena's love for mankind inspired the birth of the saints, and the making of their cloths during the holy wars against Ares. The sanctuary usually intervene in affairs that threaten the peace and/or lives of a great qnumberof people.[3][4]

In the beginning of the Saint Seiya series, battles are fought to win back the control of the Sanctuary from Gemini Saga, the impersonator of the former Pope (in the manga, Shion, in the anime, Arles). In the first part of the series - composed by arcs 1, 2, 3, 4, 5 and 6 - the five Bronze Saints fight the pope's troops in order to control the sanctuary, the only place from which Athena and her saints could effectively protect the world against the yet greater threats.

It is revealed later in the series that the saints are not the only humans to know about cosmo. In the arcs 7 (inexistent in the manga) and 8 of the series, the sanctuary faces threats from Poseidon, the god of the sea, who controls the troops of the God Warriors against the saints and, later, battles them in his own kingdom with his Marines, in order to cause a great flood that would "cleanse the world of evil."

The biggest threat is later revealed in the next arc of the manga, which was not animated in the anime (but later in OVAs), the Hades arc. It is revealed that every 264 years or so, a fierce holy war between Hades and Athena takes place, and while the saints fight for peace, the specters seek the world's dominance, believing that only the strong should rule.

The spin-offs The Lost Canvas and Episode G are centered around the sanctuary, as well as the newest part of the original series, Saint Seiya: Next Dimension (sequel canonical).

The Colosseum (コロッセオ, Korosseo) is one of the deepest areas of the sanctuary, as well as one of the first locations (in the anime, the very first) shown in the original series. Here we witness Seiya becoming the Pegasus Saint. The colosseum is mainly used to hold fights between the trainees to decide the wearers of certain Cloths, and as a place for practice.

This place is located very near to the foot of the Gold Zodiac, as Kido Saori and the five main Bronze Saints are welcomed and introduced to the Gold Zodiac by Sagitta Ptolemy here.

The Fire Clock (火時計, Hidokei) is the most prominent structure of the sanctuary, along with Athena’s Colossus. It is a colossal clock tower with four sides, so that it can be seen from anywhere in the sanctuary. On each side of the clock, twelve blue-colored flames are lit. Each flame represents a zodiac sig, and takes about an hour to extinguish. Once lit, the clock will take about 12 hours to extinguish all of its flames.

The flames are only lit to mark or time important battles or events, being used twice in the original manga series. First, marking the battle of the 12 Temples, and then marking the invasion of the specters, as well as the start of the Athena-Hades Holy War of the era. The clock was also lit in Episode G, marking the meeting of the 12 Gold Saints.

The Gold Zodiac (黄道十二宮, Kōdō Jyūnikyū; Literally meaning "Zodiac Signs") is the deepest part of the Sanctuary, consisting of twelve temples representing each of the twelve Zodiacs. Inside each of the temples, a gold saint (and, in Episode G and The Lost Canvas, their servants) resides. They align themselves over high peaks, ridges and slopes of the mountains, from the first sign to the last; namely, the temples of Aries, Taurus, Gemini, Cancer, Leo, Virgo, Libra, Scorpio, Sagittarius, Capricorn, Aquarius and Pisces. However, through wars and the passage of time, many Temples have fallen into decay, despite repairs. In the manga, the Aries Temple is nothing more than standing pillars.

All the Temples are connected by a single flight of steps, making it virtually impossible to get to Athena's chambers without the permission of each gold saint and the pope. The path is also blessed by Athena’s cosmo, serving as holy barriers preventing lesser evils, as well as any sort teleportation between two temples.

The Athena’s Colossus (アテナの彫像, Atena no Chōzō) is a colossal statue overlooking the Sanctuary from the topmost part, accessible only through the Pope’s Chamber. At first glace, the Colossus itself does not seem to have any significance but for decoration and symbolizing Athena. However, it holds many secrets that only fa ew alive now know of.

It is revealed later that the shield in the left hand of the statue is the Aegis Shield that can dispel any evil. And Nike in the right hand of the statue is, in fact, the Golden Staff that Athena herself caries at all times, calling forth miracles and bringing victories to her Saints. And all of them, including the body of the statue, are one large Cloth. It is Cloth of Athena itself sealed there since the ancient time. With her holy blood, the Cloth can be reawakened and reverted into its true form.

Furthermore, the placement of the statue has its significant meaning. It purposefully marks the Chamber of the Seal right underneath.

Saint Graveyard (の墓場, Seinto no Hakaba) is the eternal resting place of the fallen Saints located somewhere in the lower parts of the Sanctuary, adjacent to the Gold Zodiac, and is also one of many ways through which one can reach the foot of the stairs to the Aries Temple.

In Episode G, an invisible army of the Titans tries to pass through this place to the Twelve Temples, only to be stopped by the cryomancer of the Sanctuary, Aquarius Camus. And here too, is the place where the invasion of the Sanctuary in Hades arc begins.

Chamber of the Seal

Chamber of the Seal (封印の間, Fūin no Ma) is a chamber positioned directly underneath the feet of Athena’s Colossus, mentioned only in Episode G. Wards and holy spells in Greek are written all over the floor, ceiling and walls. A large black scythe with its blade through the floor is chained up at the center.

After the Titanomachy, Zeus won the throne from Cronus and successfully deposed him. He decided to seal his father’s weapon, along with all his power and Cosmo away in the safest place of all the Sanctuary. Cronus’ Soma, the aforementioned scythe, Megas Drepanon, is sealed here in this chamber. Almost the entire Episode G revolves around this weapon. 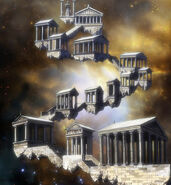 The Gold Zodiac, as seen in the Lost Canvas OVAs. 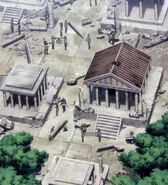 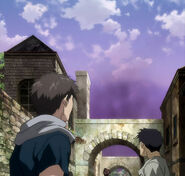 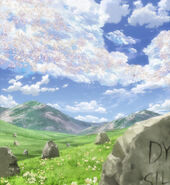 The Saint Cemetery with the Lost Canvas covering the sky 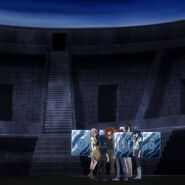