Since the wars against Poseidon and Hades, Geki abandoned his Cloth and rank of Saint to devote himself to the formation of the new generation. So he officiates as a professor at the Palestra. When Kōga comes close to the institution with Sōma is Geki that tests their skills through Yuna , the Bronze Saint of the Aquila.

However he realizes very quickly that the Pegasus Saint, besides its Cloth, has neither the knowledge nor the experience that is expected of a saint, and goes to hit him as punishment for his lack of devotion to Athena, before realizing that he was not classically trained.

Shortly after, while Kōga takes advantage of Yuna against t Dorado Spear , Geki comes abruptly to remind young people a basic rule of the Palestra: no clashes take place between students, except in the supervision of a teacher. Spear  and Yuna then settle their accounts in the Palestra arena, Geki and the opportunity to discuss the past exploits of his friends brothers in arms, to the amazement of discovering the past Kōga  instructor. Geki also reveals that his intention was not to strictly enforce the rules of the Palestra, but to ensure that Yuna reveals his soul and makes their own choices instead of being trapped in the shackles of traditions.

A little later, after the admission of Kōga at Palestra, Icchi and Geki  attend amazed at the discovery of the new element Saint Pegasus in a fight between him Ryuho , when a replica of the battle of Galaxian Wars have opposite Seiya and Shiryu . Following the victory of Dragon Shiryu, Geki strongly encourages Georges , the teacher who oversaw the clandestine struggle to pass the sponge over the mistakes made ​​by the two young men. It runs willy-nilly, and the Bronze Saints avoid some punishment.

Geki is responsible for the organization of qualifications Saint Fight , domestic tournament the Palestra whose aim is to select the best student of the institute to raise the rank of Silver Saint . It was he who led the students Palestra at Cosmo Delta to the test and see the results at the finish. It was also he who makes the decision to exclude Argo , it has not assimilated what should be one of the core values ​​of the Saints: solidarity.

In addition to the preliminary Geki is also the announcer and referee of the Saint Fight itself. Three days before the start of the tournament, the former Saint crosses the road from Eden who, conscious of his superiority, seems bored firmly. The Orion Saint persuaded to have no equal in the Palestra, the test turns into ridicule and considered a useless charade, but instead Geki believes Eden Saints could meet the higher potential him. It also seems very confident and believes that the Saints Fight this year is promising.

After the first round, while Kōga questions Seiya and his fate while the wall Geki joins. Instead of punishing him for having eclipsed without authorization, the former Bear Saint tells her own fight against Seiya, years ago, in the Galaxian Wars, and explains how the Pegasus Ryusei Ken has put to earth at the time (even if it is actually not the case, but the intention is certainly Kōga Geki would use this arcane). During the battle between Kōga and Sōma , Geki appears proud to see Pegasus  Koga use the technique of Seiya and briefly believes even recognize his comrade in his face.

The Palaestra Tournamen continues but will not go beyond the second round, the troops of March storming the Palestra. Principal meantime, who refuses to submit to God of War , quickly grounded by Captain Martian in charge of operations, but Geki immediately takes over and leads the attack against. The former Bronze Saint, the Martians are unable to stop despite their efforts, inspires students present who attack furiously at their attackers. A fierce battle ensues, while Kōga accompanied by Wolf Haruto, found his companions after escaping jail where he had been thrown.

However, during flight, Captain Martian catches up, and they owe their salvation to the intervention of Geki, which dam body and prevents Martians catch up with the Bronze Saints . Unfortunately for Geki and despite his determination, he will not win this battle, but his sacrifice is not in vain.

During the Bronze Saints attack against the Babel Tower, and after releasing the false Athena , Kōga and Yuna fall nose-to-nose with a huge pillar of crystal in which prisoners are students in the Palestra and those who owned capabilities Saints, Geki. But before they can speak or think about the problem, they are forced to flee in the face of the Gold Saint Leo, Mycenae

After recovering from the events of the war against Mars, Geki oversees Palestra's change of purpose, from further training for new Saints to help them become stronger and reach higher ranking to preparing new saints to recover the fill the positions lost in the last war. However, the war against the Pallasites starts and Spear "Brionac" Loge attacks Palestra to kill the future Saints before they're ready to fight. Geki and Hydra Ichi are immobilized by Loge's attack, but Lionet Sōma, Pegasus Kōga and the the Steel Saint Subaru manage to force him to retreat.

Eventually, Palestra comes to receive many refugees from villages attacked by the Pallasite army and Geki meets his old Bronze Saint companions, Ban and Nachi, who now train the Steel Saints. During the defense of Palestra, Libra Genbu dies. After the battle was over, Geki reunites with his Palestra students during Genbu's funeral.

Afterwards, the Saints counterattack and invade Pallas Belda to stop the Pallasites at once. During the battle, many clothes are damaged, and Aries Kiki arrivers to repair them. The pallasites decide to attack at that moment to destroy the clothes, but Geki returns, alongside Ban and Nachi, all three donning custom Steel Cloths based on their old Bronze Cloths, and manage to hold back the Pallasite forces.

While Athena and his protectors progress through Castle Pallas, Geki and his companions joined by Raki, continue to struggle to deny access to Pallasites. When Shiryu, Kiki, Fudo are forced to use the Athena Exclamation against Hyperion, Geki feels the immense cosmos release resulting from the clash between the forbidden technique and attack the Pallasite First Class.

When Koga and his companions finally manage to reach Pallas Chamber, Subaru finally found the memory failed him and returns to its original form, that of the god Saturn. Saturn retired to his castle orbiting Earth after frozen almost all the inhabitants of the planet, Geki is one of the last defenders of humanity struggling against Pallasites. 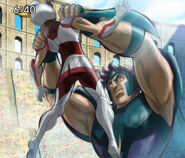 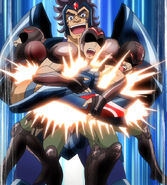