Cancer Deathmask (蟹 座 の デ ス マ ス ク, Kyansā no Desumasuku )is one of the Golden Saints of the 20th century. He is the cunningest and the cruelest Golden Saint among the Zodiac Gold Saints. His constellation is Cancer, and he was originally the keeper of the Temple of the same name, protecting the way to the Pontifical Chamber and the Statue of Athena along with the other eleven Golden Saints.

Deathmask was one of the first Gold Saints to be shown in both manga and the anime adaptation. Since his first appearance, he was depicted as a very evil and malevolent villain who used his psychic as he wanted without bending to Athena's will, despite this, he is clairvoyant and logical and exudes a somewhat urbane air. Deathmask is also ironic and sarcastic. He uses honorific towards superior and some subordinates, in the original manga, sometimes he speaks and screams in a feminine way and has a little effeminate elements, similar with Cancer Deathtoll. Deathmask decorates his temple with the souls of his fallen victims and represents them as faces, but he is afraid of his own death, easily gets into panicky volatility. Deathmask is the first Saint who knows the truth about the Pope Ares as the Gemini Saint, but continues obeying his orders. When questioned about his reasoning behind this, he explains that justice is changed according to time and perspective. This is ideology is also brought up by Gemini Saga, possibly suggesting influence or shared beliefs between the two at that point in time. During his later return during the Hades arc when he and other revived gold saints are believed to ded with Hades in exchange for life, Deathmask does not seem to carry the same overt villainous tropes as before, though he retains his usual ironic and sarcastic characteristics.

In the US version his name was changed to Mephisto. It is unknown if Deathmask is his real name or a title since he collects the souls of his victims.

Deathmask first appears in the Khrysos Synagein with the other Gold Saints, where he quarrels with Leo Aiolia, but they are stopped by the High Priest.

Later, when two of the Giants attack the Sanctuary, he fights the Giant Blue Flame and easily defeats him.

Soon after, Saga reveals his true identity and Deathmask decides to be loyal to him.

Deathmask first appeared in Rozan. He was there to reclaim the Libra Gold cloth from Dohko under the order of Pope Ares (or Gemini Saga). Shiryu stepped in and challenged him. Although Shiryu was a strong Saint, he was no match to a Gold Saint. The battle between Deathmask and Shiryu came to a halt when Mu, the Gold Saint of Aries, stepped in. Deathmask decided to retreat.

Shiryu faced Deathmask for the second time when he and Seiya reached his temple in the Sanctuary. When the two Bronze Saints arrived, they were surprised to see so many masks on the walls of the temple, even those of children. Suddenly, Deathmask appeared, and explained that these masks are the souls of the "enemies" he has defeated as well as the innocent victims that were caught in the fire while he was "fulfilling the mission". Shiryu told Seiya to go ahead to the Temple of Leo while he finishes the business between him and Deathmask. Using his technique, he sent Shiryu to the gate of hell. There, he tried to throw Shiryu into the death hole, a pit of hell. However, he was interrupted by the prayers of Shiryu's sworn friend, Shunrei. He used his telekinesis to throw Shunrei off the cliff in the Five Old Peaks. Angered for his friend's apparent death, Shiryu started to fight back. Then, piece by piece, Deathmask's entire cloth left his body. Obviously, the Gold Cloth of Cancer abandoned him due to his evil deeds and more importantly, because he completely doesn't have the accountability as a Saint. Shiryu took off his Bronze cloth. Using his seventh sense, he defeated the evil Gold Saint by throwing him into the pit of hell.

The events depicted in the movie are not canonical to Kurumada's original manga storyline.

In the 3rd Saint Seiya movie Deathmask returned from death to duel with Shiryu once more. Deathmask seemed to have the upper hand. However, Shiryu was only pretending in order to lure Deathmask into telling him the whereabouts of Athena. After he realises there's still a chance to save her life, Shiryu turns the tables on Deathmask and defeats him.

Later in the Hades arc (both in the manga and the anime), Deathmask returned with Pisces Aphrodite and Aries Shion with one apparent intention: to kill Athena. In the showdown against Aries Mu and Pegasus Seiya, he was banished into Hades' Castle by Starlight Extinction. Then, he was thrown into Yomotsu after he pleaded for mercy to Wyvern Rhadamanthys(in manga Deathmask never fights with Rhadamanthys, but kneels and begs for life in somewhat a effeminate way).

Later on, Shion revealed his plan of awakening Athena's Cloth even at the cost of being called traitors by history, thereby revealing that Deathmask and the others were not truly siding with Hades after all.

Near the end, Deathmask arrived with the Cancer Gold Cloth to break the Wailing Wall. Surprisingly, he showed that at last he became loyal to Athena.

In the official sequel Saint Seiya Next Dimension, Deathmask appears (together with the other Gold Saints) in the form of spirit to help of Athena.

As a Gold Saint, Deathmask mastered the 7th sense, hence he can move at the speed of the light (with strong suggestions that he might be just if not as fast as Milo and Aioria). Albeit being among the weakest of the Gold Saints, Deathmask has shown strong psychic powers, using his telekinetic abilities over a target in China while he was in the Yomotsu Hirasaka (practically another plane of existence). He often uses this superpower to levitate in the air as well, as shown in his first fight against Dragon Shiryu and when he fought the Giant Kyanos Phlox. So far, he only showed a single special technique:

Deathmask's guardian constellation is Cancer, and his Gold Cloth represents it and its associated myth : The crab that Hera sent to sneak attack Heracles while he was battling the Lernaean Hydra but was easily defeated.

The temple he guarded was known both in manga and the anime adaptation as Kyokai-kyuu (巨蟹宮), the "Temple of the Crab". 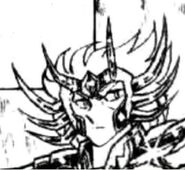 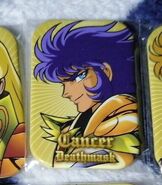 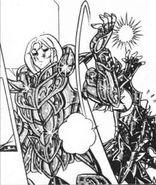 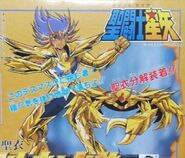 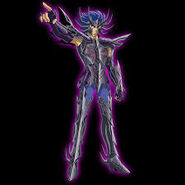 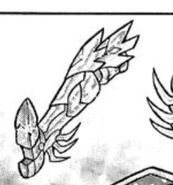