Mine (Childhood friend and girlfriend)

El Cid appears to be a quiet and introspective character, seemingly a silent assassin. He has a somewhat mysterious air, as if trying to hide something. He's determined and, although it may seem a little cold, is a gentleman.

His appearance practically identical to his canon counterpart: Capricorn Shura from the Masami Kurumada's manga. Aside for the Cloth, the character has the same black spiky hair style.

El Cid trained in Japan how to make perfect blade out, had the same desire as his partner Mine , a girl with coaching and sought to forge the sacred sword to cut all the magic sword Yoken Zan-ou'ki. With them was a man named Felser, a big-hearted person who hated fights despite its strength. One day El Cid and Mine were trapped in a fire in the forest and when they would die appeared that saved Felser, cutting trees with his bare arm out of the wood. The children were saved but Felser was badly burned, but satisfied for saving them so they could fulfill their dreams. Nevertheless, after Mine falls victim to a deadly respiratory disease, El Cid promises to fulfill the dream of both.

El Cid is sent by Sage to Catalania swordsmen a tournament with a purpose for the sanctuary, and El Cid is present in a nearby town where he meets Lacaille. There is a brief confrontation against a Gladiator and his group.El Cid enters the tournament after beating their rivals with ease early in the battlefield with Mine, Mine who suddenly pulls out a katana and a portion of the coliseum destrulle. El Cid is removed obviously shocked and tells Lacaille that Mine was an old friend who supposedly died years ago, then begin the final rounds and meets the other finalist, Black Terror Felser.

El Cid and Ferser are old acquaintances, and even hated Ferser fights now is Catalania supreme warrior and knows that the reason that El Cid was sent to that place was it. Another tournament participants manipulates a puppet attacking El Cid. El Cid destroys the puppet, but the scientist says that the electrodes of this stop his cosmos, El Cid attacks the scientist yet, but this looks like a machine. But El Cid easily stops him with his sword. Thus the Cid defeats his opponent in the first round.

The tournament is advancing and the Dark Knight and are bright gold. El Cid tells the reality of his mission: in ancient times the city was attacked by the gods and now nothing has re-emerged as a product of a dream, that according to research Sagittarius Sisyphus and his person on twin gods and especially the god of sleep Hypnos . Who is behind it all, the appearance of Mine and Ferser is because the gods Hypnos and dreams.

Cid berates Ferer of this release the god Hypnos, A Felser not care either and both will fight to Cid. The Ferer power increases due to the wrath of the people, and by the power of another god of sleep: Phobetor and Zanoki draws his sword. It was through the power of God that everything came true, when everything seems to favor Ferer, El Cid takes off his armor and sharpen your sword. The battle of El Cid and Feser is at its most exciting, with Cid determined to fulfill the destiny of his sword and the Felser and Mine but the power of the sword Feser is beyond what you can imagine Cid. And El Cid sees the true form of the sword Zanoki. and can show the power of his sword. Ferser explains his motives that generated all through the power of God to see Mine sleep again, suddenly the power of God Phobetor is revealed.

Phobetor tells El Cid  thanks Ferser to Athena has been released after having sealed long ago. The sky begins to break and Phobetor and says the city will be absorbed by the Dream World. Phobetor begins to absorb the power of people clinging to the dream of Mine, El Cid thinks not surrender and will absorb Phobetor holy gold and can not move. When everything seemed in order, Mine tells El Cid to end this dream that what they want is to become El Cid Excalibur and thus strength and slows Capricorn one of the gods of dreams (Oneiros) Phobetor and crosses the giant god. Mine takes leave of the Cid. Ferser goodbye and apologizes to El Cid.

At the end of Chapter, El Cid goes with Lacaille back to the Shrine and he accepts the hard way to becoming a saint but he will and we already Lecaille in the Sanctuary and the bottom is Sisyphus (recall that becomes Puppis Lacaille killed in battle with the rest of the Oneiros).

After the death of Gold Saint Cancer Manigoldo during the battle that sealed the God of death, Thanatos, El Cid into action, searching the World of Dream to free the soul of another Gold Saint, Sagittarius Sisyphus. On his way he meets several Specters of Hades, including Genbu Gregor, which defeated effortlessly. But then he is surrounded by three of the four Gods of Dreams, Oneiros, Icelus and Phantasos, who seek the soul of Pegasus Tenma, to imprison her forever in the World of Dreams and thus prevent further reincarnated in the future.

El Cid decides to attack Icelus, but manipulates space and return the sharp attack that severed his arm below the elbow. El Cid tries to attack him with a kick, but Icelus Strikes and throws him off a cliff, giving it up for dead, while Phantasos decides to take the severed arm as a souvenir. But El Cid survives the fall, and he entered the World of Dreams as a guide using the resonance of the protector of his severed arm, appearing right next to Phantasos, which destroyed at once. The Cid then reaches Phobia, which is governed Icelus, which wants to continue his battle against the Gold Saint Despite the lack of arm, El Cid can still create a sword of Cosmo to attack, but returned Icelus all his shots, causing many cuts, and attacking from space distorted so that Cid can not guess where you are going to be attacked. After receiving several blows, El Cid decides to spray the area with his own blood, and know where the space is distorted, revealing where will tacar Icelus, thus defeating a single thrust.

El Cid makes it to Morphia, which is enclosed the soul of Sisyphus and where he met Tenma, who just beat the fourth God of Dreams, Morpheus. The soul of Sisyphus should have been released after the death of Morpheus, but his own anguish and sorrow will remain locked, preventing Tenma or El Cid come to rescue him. Then the last survivor of the four gods, Oneiros appears, and summons the souls of his three brothers to create a gigantic creature. El Cid and Tenma attacked, but recovered from the blows and uses his technical Guardian Oracle the Saints, but are defended by the soul of Athena, which due to damage caused by Tenma and El Cid in the World Dreams, has been able to travel there to save the soul of Sisyphus. El Cid short space Oneiros after, thanks to his technique and Stone Jumping Pegasus Meteor Punches Tenma, get Oneiros get to the real world in order to protect the dream of Sisyphus while Athena is inside, but once outside and discover Onerios murders three subordinates of El Cid who had come to try to help, Pyxis Rusk, Puppis Lacaille and Vela Tsubaki .

The battle continues Onerios, but neither Tenma and El Cid are capable of causing permanent damage, even with the help of Unicorn Yato and Crane Yuzuriha , who come to their aid. Luckily, Athena gets release Sisyphus of his dream and bring the real world, in the Sanctuary, from which Sisyphus launches Golden Arrow loaded with Athena's cosmos, heading into battle. Through telepathy Sisyphus explains his plan to El Cid, which involves cutting the Golden Arrow into four with his sword, allowing them to him to pierce the four souls of the Gods of Dreams simultaneously. Onerios attempts to end Tenma's life before he dies, but El Cid intervenes and stabs him in the chest with his severed arm, dying later in the resulting explosion.

In the anime the story is very similar to the sleeve, but is enlarged. To begin with is a deeper friendship with Sagittarius Sisyphus, to the point that they were both, and not only Sisyphus, who traveled the world investigating the twin gods, Thanatos and Hypnos. It also explains that El Cid always keeps his subordinates regardless of their missions, to avoid being injured, but is very strict with them, running the sanctuary laws without mercy, as when he almost killed one of his apprentices, Pakia, for desertion, which stopped running Sisyphus. The fighting is slightly different. Phantasos attacks El Cid with his technique Grim Phantasia, which add to his victim's fondest dream, but the dream of El Cid is his own sword, perfected, this sword of El Cid and destroys the illusion of Phantasos, revealing that actually has a male body, that's when El Cid attacks and ends with God. His battle against Icelus is similar, only longer, while during his battle against Oneiros into the World of Dreams, El Cid Deliberately attacking the barriers between the worlds to open a path to the soul of Athena. After the death of his subordinates, El Cid goes to her side to hear his last words, with which they explain that the Saints are proud to die knowing that at least once have fought alongside his master. The rest of the fight takes place as in the manga.

Is quite simple compared to other, although the horns having the same on the hull give a little more so. In LC, the armor of the Cid undergoes certain changes and that is that, unlike in SS Shura, remains faithful to the first design Kurumada in the hull as it is not complete. It also has a horn-shaped protrusions right shoulder, which also were part of the original design. The armor of the Cid his attack power in part because, when you connect it with its owner, seems to convey part of the cosmos and thus part of their strength and abilities.

Capricornus (the goat half fish, ♑ Unicode symbol) is one of the constellations of the Zodiac, commonly called Capricorn, especially in relation to astrology. Although often depicted as a goat, is usually added a fish tail. 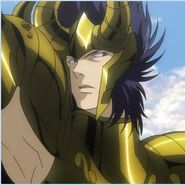 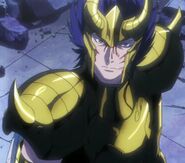 Retrieved from "https://saintseiya.fandom.com/wiki/Capricorn_El_Cid?oldid=55141"
Community content is available under CC-BY-SA unless otherwise noted.