Saint Seiya, part I: The Sanctuary

Upon receiving the mission to execute the Bronze saints he along with Eagle Marin, Whale Moses, Lizard Misty, and Hound Asterion Asterion went to Japan. After Misty caused the avalanche on Mount Fuji, Babel went after Cygnus Hyoga. He defeated the saint in no time, and buried him alongside the rest. But when they headed back to Sanctuary, Misty stayed behind for something was troubling him. After some time the Centaurus Saint felt worried and headed back to find Misty lying on the beach were they had buried the saints. In reality, Aries Mu had made an illusion so that the Silver Saints believed the Black Saints to be the Bronze Saints. Babel was stunned to see Pegasus Seiya's "Saint Calling Card" on misty body, and was sure Marin had killed him. It was the Hyoga appeared while throwing his own calling Card at Babel, Hyoga quickly came to the conclusion of what really had happened and mocked Babel.

Their fight started in an instant and Babel sent his invincible flames at Hyoga, creating them from thin air was no problem for the Centaurus Saint. Yet as he unleashed his greatest technique "Fotia Roufihtra", it was immediately frozen by Hyoga. Babel was surprised to see his flames frozen, and the Cygnus Saint spared no time and used his "Kholodnyi Smerch" on him.

The Silver Saint was defeated, and asked in his final words if they really wanted to make Sanctuary their enemy. Hyoga replied that they would, and walked away calmly.

Babel's appearance wasn't so detailed in the Anime as it was in the manga but he was more powerful and not so easily defeated. He appeared in the Grado Colosseum as the Saints just had found out that Saori was the reincarnation of the Goddess Athena and attacked them. Hyoga is the first to step forward to challenge the Silver Saint; Seiya also tried to fight back but he was weakened from his previous fights so he couldn't do anything against him.

Hyoga tried to stop Babel's attacks with his ice techniques but even his Diamond Dust was useless against his enemy. Upon being in trouble, the Steel Saints, who were watching the battle for a while, intervened and doused Babel's flames. This gave Hyoga the chance to finally land an attack on him, and while Babel survived the Diamond Dust, he was defeated by the Aurora Thunder Attack shortly after. As the Centaurus Saint lay dying, he was confronted by Athena and recognized her as the true Athena and was wished by her to reincarnate again so he could fight for justice and peace.

In the Hades arc adaptation to anime, Babel had been resurrected by Hades and went with Resurrected Lizard Misty and Resurrected Whale Mozes to Siberia where Hyoga was. They tried to defeat him but were easily overpowerd by Hyoga's chilly ice. Yet as they lay there dying among the ice, they entrusted Athena to his care. 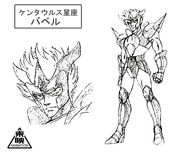 Centaurus Babel bounce into the Colosseum 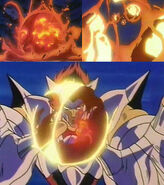 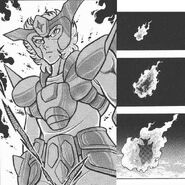 Babel's entrance in the manga panels

Centaurus Babel Vs. Cygnus Hyoga in the manga panels

Add a photo to this gallery
Retrieved from "https://saintseiya.fandom.com/wiki/Centaurus_Babel?oldid=51786"
Community content is available under CC-BY-SA unless otherwise noted.