Crane Yuzuriha (鶴星座のユズリハ, Kurein no Yuzuriha) is one of Athena's Saints in Saint Seiya: The Lost Canvas. She is the Crane Silver Saint and former training partner of Aries Shion. She does not wear her Silver Cloth until reaching the Sanctuary, and tends not to wear a mask like any other female Saint.

Further into the story, Yuzuriha becomes a friend of Pegasus Tenma and Unicorn Yato. And like all other Saints, protecting Athena becomes her primary goal. She is also the main character in the short story Yuzuriha Gaiden. Yuzuriha is a student of Hakurei, the Lemurian master, and former training partner of Aries Shion. She does not wear her Silver Cloth until reaching Sanctuary, and tends not to wear a mask like any other female Saint. As revealed in her short story, she was the elder sister of Heavenly Skillful Star, Hanuman Tokusa, a deceased Specter of Hades' Army. She appears for the first time in the chapter 012: Mysterious Warrior.

Like her master, Yuzuriha is able to use psychokinesis. She is also an experienced fighter, being one of the most powerful Silver Saints. In combat, she aids herself with her scarf-like garment.

She first appears after the apparent death of Pegasus Tenma at the hands of Alone. She finds Tenma's dying body and Unicorn Yato who tried to attack her as he thought she was an enemy. However, Yuzuriha reasoned with him and took him and Tenma to Jamir. When they arrived, she offered her blood, allowing her master Hakurei to repair the Unicorn Cloth. Shortly thereafter, she is sent to the Underworld with Yato to rescue the soul of Tenma, which was trapped by one of Hades' specters.

She's been lately seen helping Leo Regulus after he was easily defeated by Garuda Aiacos' attack; and then going up to the heavens for the final battle at the Lost Canvas, aboard the Ship of Hope. She was turned into stone but was revived by Athena's power. She was transported by to Earth with the others and was stripped of her Cosmos, therefore, living a normal life.

Grus (the Crane) is a southern constellation. It is one of the 20 constellations created by Pieter Dirkszoon Keyser and Frederick de Houtman between 1595 and 1597, and his first appearance in the book Uranometria of Johann Bayer in 1603. Gruis α, known c omo Al Nair, and β Gruis are stars of second magnitude, the brightest in this constellation. It also contains several stars with extrasolar planets as τ1 Gruis, HD 208487, HD 213240 and Gliese 832. 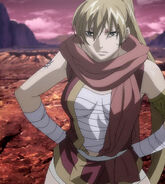 Yuzuriha escaping from the swamp in the Forest of Death. 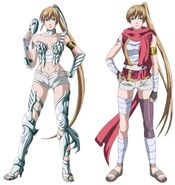 Crane Yuzuriha in both her Normal Wear and Cloth
Add a photo to this gallery
Retrieved from "https://saintseiya.fandom.com/wiki/Crane_Yuzuriha?oldid=54806"
Community content is available under CC-BY-SA unless otherwise noted.