Rozan
The Dragon Cloth is a legendary Bronze Cloth, known for its large shield on its left arm guard.

The Dragon Cloth is based on the constellation Draco (Greek for Dragon). There are various world myths behind the constellation, although the most common is the story of the dragon Ladon, the guardian of the Golden Fleece of King Aeetes. Ladon was stationed at the grove containing the Fleece, but was laid to sleep by the witch Medea, Aeetes's daughter. She does so after having fallen in love with the hero Jason, who sought the Fleece to obtain the throne of his kingdom from his wicked uncle, Pelias; the pair escape with the golden artifact. The Draco constellation is also associated with the dragon who guarded the golden apples in the garden of the Hesperides (a family of nymphs and the daughters of the Titan Atlas). In Mesopotamian myth, the constellation is associate with the chthonian goddess Tiamat and her mate Apsu, who were depicted as giant serpents or dragons; both were slain by the Mesopotamian gods after the couple plotted to destroy their offspring for being noisy.

Its reputation is unmatched by any other Cloths among Athena's Saints, and only very few have ever shattered it. The Dragon Cloth itself is noted for its ultimate durability, as it spent the last 200 years bathed under the mineral-rich waterfall of the Rozan mountains, which made it harder than diamonds. This is the origin of its nickname "The strongest Fist and Shield".

Seiya manages to destroy the Shield by tricking Shiryu into hitting his own shield. Shiryu's Cloth has suffered various damages throughout the series, and, of course, required repairing. With each revision its shape gained a new form. In the anime, along with the same repairs from the manga, the Cloth went through three different designs.

Due to having reformed from using a Gold Saint's blood (Dohko's blood in manga, Mu's blood in the anime), the third version of the Dragon Cloth (second in the anime) can suddenly become gold with power whenever Shiryu uses his Cosmo to the maximum. At that point, Shiryu has awoken his 7th sense, and is as powerful as a Gold Saint momentarily. However, in the battle with Chrysaor Krishna, Krishna comments that, even with the golden Dragon Cloth, Shiryu's power level is still that of a Bronze Saint, and continues to overpower Shiryu with his attacks.

The fourth version of the Dragon cloth(third in the anime), aka Final Bronze Cloth, is reformed by Athena's blood. With this and awaking the 8th sense, Shiryu fights specters in the Hell and can go to Elysion. In the Elysion, God Cloth of the Dragon is recreated from dust to fight Hypnos and Hades.

The Dragon Cloth represents the constellation Draco, which is associated to Ladon, the hundred eyed dragon who guarded the golden apples of the Hesperides, in Greek mythology. 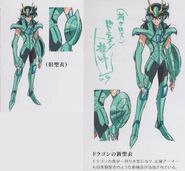