Equuleus Shō (sister)
Equuleus Kyōko is one of the Saintias and the sister of Shō.

5 years before the main story

Shortly after a fight with Shoko, Kyōko went looking and found her in the Eden of darkness, accompanied by a strange old woman. On this occasion, the first time Kyōko saved her sister from her sad fate. When unknown resorted to force, the two children were saved by Scorpion Milo, who came to prevent the resurrection of the goddess Eris. To preserve Shoko from this threat, Kyōko followed a special training for five years, which made ​​her a Saintia.

Five years later, Kyōko is ready to keep her promise. Also reappears when it is to save a subordinate Shoko Eris. Two sisters then savor their reunion Kido mansion.

But at night, the place is mobbed by Dryad Ate, who defeated Kyoko. Despite its inferiority Kyōko does not flinch and rises several times to protect her sister and goddess. When Shoko is finally captured, Kyōko fly one last time to rescue her and become the new host of Eris before disappearing. She leaves behind her Cloth and her sister crying.

The host of Eris

Following these events, Kyōko loses control of her body in favor of Eris. However, Kyoko does not disappear completely. Her consciousness and managed to temporarily take over the goddess when the latter found Shoko. On this occasion, the Cosmos resonates with her former Cloth and sister. 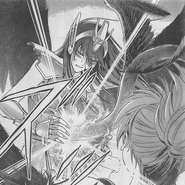