Seiyapedia
Register
Don't have an account?
Sign In
Advertisement
in: Characters, Gold Saints, The Lost Canvas characters,
and 4 more

Gemini Deuteros (のデフテロス, Jemini no Defuteros) is the second Gemini Gold Saint and Gemini Aspros' twin younger brother in Lost Canvas. Although he is a Saint, he doesn't remain in the Sanctuary, but isolates himself in an island called "Kanon Island".

Deuteros, being the twin of Aspros, was a fairly tall man with long blue hair, blueish eyes and a muscular body. Deuteros during his childhood and most youth was wearing a standar apprentice clothing and a mask that covered from his nose down.

It was not until he joined the war that he started to wear the Gemini Gold Cloth.

Deuteros was a cold, ruthless man with no mercy over those who weren't strong enough to fight, whether they are civilians, specters, or even other saints.

Deuteros showed that despite his attitude, he still cared for his older brother, to the point that he sacrificed himself in order to release his brother from the Genrō Maō Ken.

Deuteros grew up in the Gemini Temple with his older twin brother Gemini Aspros. Born under the star of chaos, he wasn't allowed to watch the Saint's training and had to hide his presence, wearing a metal mask, which covered his whole face except his eyes. Only a handful of people were aware of his existence. However, most of them treated him poorly, claiming that his life had no meaning and calling him the "shadow" or "second" of Aspros. Although he wasn't allowed to watch the Saint's training, he disobeyed that law and continued to spy on his brother. Once he was caught by the guards, who punished him using a whip. Fortunately, Aspros had noticed this happening and rushed over to his brother's side, protecting him with his body and receiving the blow of the whip instead. After telling the guard that the two of them could not survive without the other, the man left the two boys after scorning Deuteros for a last time and calling him "second".

Watching the stars together, Aspros and Deuteros talked about the previous accident, showing the worries about the other's wound. During their conversation Deuteros called himself his brother's "shadow". However, Aspros told him that Deuteros should not listen to the other's bad talking and that he was not his shadow. Afterwards he told

Deuteros that he was going to become strong enough to make it possible for both of them to exist on the surface, freeing his brother from his life in the shadow and from the mask he was forced to wear. Although Deuteros called Aspros a dreamer he had admired his brother's mental strength and wished for Aspros The next Holy War was advancing and the talk about the next Pope was main discussion in the Sanctuary. While eavesdropping the other's conversation, Deuteros had learned that the Sagittarius Sagittarius Sisyphos was chosen for that honour instead of Aspros. Worried about his brother's reaction, Deuteros made his way to find Aspros. Eventually, he arrived in a small cottage on the Star Hill, where he had found Aspros, who suffered a mental breakdown and made a mess in the small building. Suddenly Aspros' personality changed. His brother told him that he intended to obtain the Pope's power. Using the Genrō Maō Ken ("Demon Emperor Fist") on him, Aspros ordered him to kill the Pope.

Heading to the Pope's chamber, Deuteros appeared before the Pope Sage to take his life. Sage told Deuteros that he had known about his existence beforehand and that he knew why Deuteros came to him. Deuteros released a blow at him, which was blocked easily by the Pope. Suddenly Aspros appeared, claiming that he should be the one who should punish his brother. Sage claimed that he didn't want to see such a terrible scene and turned his back to the twins. Aspros raised his hand, pretending to execute his brother, but aimed at the Pope. That murderous attempt was altered by the Virgo Asmita, who had been hiding in the room and was waiting for their arrival with Sage. The twins were confronted by a Gold Saint and the Pope at the same time. However, Aspros was confident that they had the upper hand, because Deuteros, whom he had started to call his "puppet", "replica", "second" and "shadow", had the same strength and cosmo like him. Entrusting Deuteros to Asmita, the Pope announced that he would deal with Aspros on his own.[[|[1]]]

Trying to disobey the Genrō Maō Ken, he continued to shout in his mind that Asmita should not advance him. Asmita seemed to have noticed his thoughts and created an inside view of Deuteros' heart. It was chained by thorns, which represented the technique Aspros used on him. However, the Gold Saint also claimed that Deuteros had always been Aspros' puppet though. Angered by that comment, Deuteros tried to reach for Asmita, but was stopped by the thorns. Then Asmita told Deuteros that there were no light and darkness in the two of them in the very beginning. However, Deuteros had enabled the darkness of Aspros to take over him, because he only wished Aspros to become stronger and continued to live in his shadow, becoming his puppet. Realizing his errors, Deuteros pleaded Asmita to tell him what he had to do. Instead of receiving an answer, the Virgo Saint only told him that Deuteros was supposed to know the answer. Afterwards, Deuteros returned to the Pope's Chamber, where Aspros was just about to take Sage's life. Instead of doing the act himself, he ordered Deuteros to kill the Pope. However, the fist Deuteros raised wasn't directed to Sage, but to Aspros' heart. Seeing the Virgo Saint alive, Aspros noticed that Deuteros had defeated the Genrō Maō Ken and had regained his own will. Before Aspros died Sage told the Gemini Saint that he was supposed to become his successor and the rumour was only a test. After hearing that statement, Aspros used the Genrō Maō Ken on himself and announced that he would take the Pope's throne even after his death.[[|[2]]]to reach his zenith. Watching his brother from the shadow, he had started his own training though.[[|[3]]]

After three years, Pegasus Tenma appeared before him and requested to become his student. At first

Deuteros dismissed the Pegasus Saint and told the boy to jump down from a hill, which bottom was not in sight. After Tenma obeyed, Deuteros believed that he was rid of the Saint and turned to leave. However, Tenma proved him wrong, climbing the hill up with a light head wound. Acknowledging the Pegasus Saint's strength, Deuteros threw the Pandora Box, in which Tenma's Cloth was, down the hill and gave the boy a hard training, threatening that he would eat Tenma when he failed. Consequently, Tenma learned to master his cosmos perfectly and to awake his 7th sense briefly. The Gemini Saint was surprised that Tenma, who could even stop the eruption of the Vulcan, had succeeded his training. After finishing his training, Tenma lost his consciousness and was saved by Deuteros, who brought him to the location of the Pegasus Cloth, which he had brought back from the depths of the hill. Then the soul of Asmita appeared before him for a short time, telling Deuteros that he should not isolate himself on the island, but fight for other's and his own sake. Afterwards Deuteros took his leave, telling the unconscious Tenma to take care of the Cloth, which might be his gesture to show respect to Asmita, who had bestowed that Cloth with his blood.[[|[4]]]

Later on, Deuteros appeared on a hill of Kanon's Island, noticing Sisyphus' death. After announcing that he could not understand why his fellow Saint sacrificed himself so that the weaker ones could continue their way, he treated Dohko's wounds, who was brought half-dead to him, using Athena's blood.[[|[5]]] He told the Libra Saint that Kagaho had brought him to the island.[[|[6]]]

Afterwards, he gave Dohko a vial with Athena's blood and that he should return to the Sanctuary. After Dohko revived Athena's Cloth, Deuteros appeared once again and saved Dohko, using his technique "Another Dimension" to transfer themselves to the Lost Canvas. After erasing parts of Dohko's memory and sending him to Athena, he confronted his brother in the temple of Mars.[[|[7]]]

In the temple of Mars, Deuteros recalled his past by seeing the broken mask and the resemblances of the temple with the Gemini House. His older twin brother who wore the Surplice version of the Gemini constellation launched the Demon Emperor Fist at Deuteros once again. Believing that he fell under Aspros once again, he was ordered to kill Athena. However, he had become able to fight off the devilish technique on his own without the help of Asmita or the Pope, releasing his own technique "Mavorus Eurption Crust". However, the technique was overpowered by Aspros' "Galaxian Explosion" easily. The older twin brother ordered him to use the same technique on him too. However, Deuteros refused, claiming that the "Galaxian Explosion" was a holy technique of his brother, which he was not going to use on a disgusting entity Aspros was at the moment. He was told that he was still an incomplete demon, because he cared about the opinions other people, which was the great difference between them. Realizing that there was only evil left in his brother, Deuteros released the ultimative technique of the Gemini Saint. In the end, he was defeated by Aspros. However, he still claimed that his fist was stronger. Smiling sincerely at his brother for a last time, his body dissolved, leaving the Gemini Cloth behind.

He had lifted the Genrō Maō Ken technique from his brother with his death.

Superhuman Strength: As a Gold Saint Deuteros had the strenght to destroy a gigant boulder with a single finger and cause inmence damage with one hit.

Cosmos Mastery: As a Gold Saint, Deuteros has fully mastered the 7th sense, what gave him great power and the ability to move at the speed of light.

He has also the ability to erase parts of people's memories. He has performed this ability on Dohko to keep the awakening and the place where the Athena Cloth is hidden as a secret.[[|[8]]] 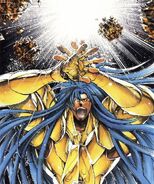