Gullinbursti Fróði (グリンブルスティのフロディ, Gurinburusuti no Furodi) or Frodi is one of new God Warriors introduced in Soul of Gold, who protect Asgard and serve Andreas. In the first episode he faces off with Leo Aiolia before he is overcome by the Leo God Cloth and flees.

Frodi is a loyal warrior of Asgard that just wants to see his home in peace,however sometimes he may be arrogant because of his honor and strenght.He´s part of a family that defends Asgard for ages as the sword of light that destroys the incoming threats,mirroring Utgardr´s family that is the shield of darkness that protects Asgard.

Frodi faces Aiolia in the first episode as said before and flees after seeing the saint´s god cloth.He appears later on in episode 4 when Andreas gathers the god warriors and then in episode 6 he reappears when the god warriors receive their new odin sapphires.In the next episodes he appears facing Aiolia in Vanaheim,the chamber that he protects in Yggdrasill.When Lyfia appears and gets murdered by Utgardr,Frodi rebels and faces his fellow god warrior to find out the truth about Andreas and what´s happening in Asgard.Frodi wins the fight destroying his chamber and obtaining the Odin robe that Utgardr was hidding.Frodi delivers the robe to Lyfia that returned during the final battle and recognized that Aiolia was worthy to use it against Loki.He then protects Lyfia fighting the incoming Einhenjars that were trying to kill Lyfia.After the final battle Frodi is seen at the asgardian colosseum alongside Surt,Heracles and Sigmund training the next generation of asgardian warriors. 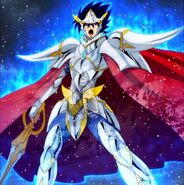 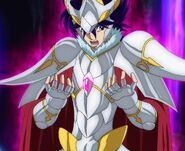 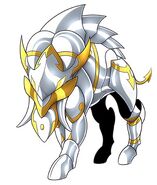 Gullinbursti God robe
Add a photo to this gallery
Retrieved from "https://saintseiya.fandom.com/wiki/Gullinbursti_Fróði?oldid=51986"
Community content is available under CC-BY-SA unless otherwise noted.