After the two groups of Silver Saints had failed to kill the Bronze Saints, take back the Gold Cloth and kidnap Saori Kido. The Grand Pope felt he had to send a Gold Saint to Japan to finish it all. The one he sent was Leo Aiolia, the brother of the traitor Sagittarius Aiolos. The Grand Pope didn't trust him completely so he sent three Silver Saints to keep tabs on him. It turned out they were true about their suspicions, since Aiolia saw no honor in fighting an injured foe. So as the Gold Saint didn't finish of neither Pegasus Seiya or Ophiuchus Shaina, the three Silver Saints made their entrance.

Canis Major Sirius was the first one to reveal himself with Algethi and Musca Dio behind him. Sirius immediately accused Aiolia of being soft, and seeing as he was the brother of a traitor, the Grand Pope had told them to keep an eye on Aiolia. The Gold Saint responded that he would finish his mission, and said that they should return to Sanctuary. Yet they did not trust him and Algethi took Seiya by surprise and used his Kornephoros on the Bronze Saint. But the attack was interrupted in mid-air by Dio who wanted a piece of Seiya and thus used his attack on him. But his attack was also interrupted, this time by Sirius who said they should compete for the final blow. Thus Algethi threw him up in the air once more and the three Silver Saints prepared to finish him of the fastest they could. But suddenly Seiya disappeared, he was taken in by the Sagittarius Gold Cloth and defeated the Silver Saints in an instant

In the Hades arc adaptation to the anime, Algethi was resurrected by Hades. With both Sirius and Dio he set out to Japan for Andromeda Shun. There they fought until Shun equipped his Cloth and easily defeated them, in their dying words they commented how powerful the Bronze Saints had become.

Although Algethi's resurrection was clearly depicted in the anime adaptation as a minor addition to the manga plot, Kurumada only hinted it in his manga, with the opened tombs of deceased Silver Saints.

Algethi's previous incarnation in the 18th century appeared in the still non-canon sidestory Saint Seiya Lost Canvas. His name was not revealed, but he was physically identical to his 20th century incarnation, and was addressed to by the name of his constellation, Hercules.

Since this 18th century incarnation appears only in that sidestory, non-authored by Masami Kurumada, he still holds a status as a non-canonical character. 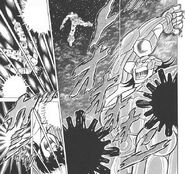 Add a photo to this gallery
Retrieved from "https://saintseiya.fandom.com/wiki/Heracles_Algethi?oldid=53993"
Community content is available under CC-BY-SA unless otherwise noted.