The Hercules Cloth  is one of the Silver Cloths, the cloth of the Saint Algethi in Saint Seiya and an unknown Saint in Saint Seiya: The Lost Canvas.

The Hercules constellation represents the legendary Greek hero and demi-god son of Zeus. Born to a mortal queen, Alcmene, even as an infant Hercules had godlike strength. However, he was deeply hated by his stepmother: Zeus's wife Hera, after whom Hercules gained his name ("Glory through Hera"). Hercules was raised a prince and married a Theban princess, Megara, but Hera, galled at the idea of this illegitimate son of her husband having a happy life, struck Hercules with madness, causing him to murder his wife and children in a psychotic rage. Coming to his senses, Hercules consulted the oracle of Delphi to find out how to atone for the killings. The oracle instructed Hercules to find his cousin, King Eurystheus, and perform 10 heroic Labors for him. If Hercules could do so within 12 years, not only would he be forgiven, but he would become an immortal god. Hercules does as the oracle instructs and completes the 10 Labors, although two earlier ones were not counted by Eurystheus, causing Hercules to perform 2 extra Labors (hence the total of Twelve). Hera appears in at least three Labors to prevent Hercules from succeeding, but she is not successful in stopping him. After being freed from Eurystheus's service and absolved of his family's murder, Hercules has a few more adventures before remarrying a young woman, Deianeira. However, while setting his new wife on the back of a centaur, Nisus, to cross a river, the centaur lusts after Deianeira, but Hercules shoots him down with a poisoned arrow when he tries to flee with her. Dying, Nisus takes revenge by tricking Deianeira into soaking one of her husband's tunics in the centaur's blood, insisting it is a love potion to prevent Hercules from having an affair when he travels. Unfortunately, when Hercules puts on the tunic, it causes agonizing burning pains throughout his body. Unable to remove the shirt, Hercules chooses to die than live with the horrible pain; he and a servant build a funeral pyre and Hercules lays down among the flames. He is rescued however by his father Zeus, who brings Hercules to Olympus and makes him the god of strength and athletics. The hero is also finally forgiven by Hera, who allows him to marry her daughter Hebe, the goddess of youth.

All Talk, No Game

Algethi trained to be a Saint in Uganda, by an unknown master. The cloth was likely kept in Sanctuary until a Saint worthy of wearing it was found. He follows the orders of the Pope, and is among the three Silver Saints to follow Leo Aiolia, in case he should betray Sanctuary. Algethi and the other two Silver Saints attempt to kill Seiya, but he kills all three of them with the Sagittarius Gold Cloth.Algethi fares the best of the three, getting his special attack and an extra uppercut to Seiya, before Seiya kills all three of them.

The Hercules Saint was killed early on while trying to keep Griffon Minos out of Sanctuary, in The Lost Canvas. The previous wearer of the Cloth comes back when Hakurei calls for those who fought with him in the previous Holy War.

Techniques and abilities used by the Hercules Saints

The Hercules Silver Cloth, while having all of the strength and endurance of a Silver Cloth, has no special traits that make it stand out as a cloth Kornephoros (greek for Club Wielder): An offensive technique. The user grabs the foe and throws them very high in the air. The technique either intends for the foe's fall to kill them, or for the user to attack as they come down, but it is not shown which is the intent in the manga. 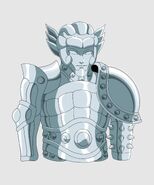 Heracles Cloth (Manga)
Add a photo to this gallery
</p>
Retrieved from "https://saintseiya.fandom.com/wiki/Heracles_Cloth?oldid=53992"
Community content is available under CC-BY-SA unless otherwise noted.