Seiyapedia
Register
Don't have an account?
Sign In
Advertisement
in: Characters, Gold Saints, The Lost Canvas characters,
and 3 more

Leo Ilias (獅子座（レオ）のイリアス, Reo no Iriasu) is the former Saint Leo during the Holy War against Hades of the eighteenth century, told in Saint Seiya: The Lost Canvas. Father to Leo Regulus, and the elder brother of Sagittarius Sisyphos. He is famous for his ability to speak to the earth. Leo Ilias could talk to the forest, the wind and the river with only one direction. Full of kindness, wisdom and courage, he was considered the most powerful Gold Saint of his generation. He died 10 years before the story at the hands of Wyvern Rhadamanthys.

Ilias's personality is quite strange, in terms that can not be explained simply. With a very strong connection with nature, respect and dedication end, half going to the forest to spend his last days as it has a terminal illness, takes his son to take care of him because the mother had died. Ilias no longer wants to keep fighting, in fact his passive attitude annoys Taurus Rasgado. Ilias shared dedication to Athena, to care for the Earth and his family.

Ten years before the events of the current war, Ilias was recognized as the most powerful Saint. Ilias spent most of his time in the woods with his son Regulus, maintaining a harmonious relationship with nature.

One day, while his son was trying to catch food, do not appear to Ilias which explains that the fate of a fish was not over but his son says he is hungry then Ilias says he will talk to the fish. Just by extending his hand, two fish swarm to it. His son asked him if he is a vegetarian, and in response, Ilias replied that the earth has said that today brings a guest from afar, Taurus Rasgado, who was arriving soon. In the evening while talking, Rasdago asks if Regulus was his child, where Ilias says that his mother has returned to earth. Rasdago explains the Athena Sanctuary needed it had not yet fallen and yes Saint began to appear that need the most powerful Gold Saint Leo Ilias, while Ilias evade the conversation with something that bothers Rasdago decides that even for the force will take with him, Regulus intervenes saying that his father has not done anything wrong, Rasdago stops his attack but warns that it will not go until Ilias returns to the Sanctuary.

The next morning, Ilias prepares to return to being a Gold Saint, even though he was sick. Through his link with nature, he sensed enemy Spectres approaching, so he awaits its opponents in the nearby village. soon after the attacking Spectres realize that Ilias is the only one defending the villiage, he quickly defeats them with Lightning Plasma. Ilias sees that there is one more Spectre appear, which is none other than one of "The 3 Judges of Hell", Wyvern Rhadamanthys.

Meanwhile in the village, Rasgado helps evacuate people while carrying Regulus at the same time. Harpy Valentine appears out of nowhere to fight him. While these two are fighting, Regulus escapes, heading to where his father is, only to see him get injured by Rhadamanthys. Ilias realizes that his star will soon disappear, and with his son watching the sky, he envisions the birth of a new star. Rhadamanthys notices Regulus, so he decides to kill them both. Ilias said that he won't let him hurt his son, so the two attack each other with their best techniques. With his tells his son that he has his own destiny, power encounter after the attack shows it to Ilias broken horn that went against his son while he was assassinated . 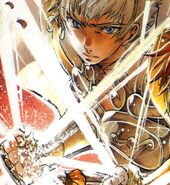