Protect the Ship of Hope

Once in Tibet Himalaya, he meets his old sparring partner Yato, and the other Bronze Saints. Being practically a novice in terms of culture, he is confused by the work and effort of Bronze Saints in repairing the boat.

Regulus used his technique to destroy the ice that surrounded the Ship of Hope, that will be used by Athena to reach the Lost Canvas. The attack was so quick, that the Bronze Saints couldn't see it when it was performed. He engages into a fight with Behemoth Violate, overcoming her tremendous strength two times, the first one when he concentrates his Cosmo in his finger tip, to stop the attack of the Specter. The second time, when he discovers the truth behind Violate's shadow technique, avoiding the attack of the dead, and making them attack her own controller. At the end of the fight, Leo simply fulminates Violate with his Lightning Plasma. From the view of his opponent, he would see himself trapped in a net formed by rays of light, which are the traces left by his fist. After his battle with Violate he was struck by surprise by Aiacos and was retrieved by Yuzuriha. He has been seen reuniting with Athena's army in heaven and together with Sisyphos and Shion he opened the gate to the Lost Canvas with the Athena Exclamation.

Entrance to the Demon Temple

There he survived the voyage through the clouds which turned all non-Gold Saints (except Pegasus) into stone and arrived at the Second Demon Temple, along Shion and Tenma, where he was ensnared by Balron Rune's whip, being freed thereafter by the Aries Saint, thus proceeding to the next Temple.

He was shown arriving to the Saturnus Temple, preparing to engage in battle. Regulus attacks the Wyvern along with Tenma, only to have their attacks negated by the Specter. After the defeat of Partita, Regulus encounters Wyvern in the Saturnus Temple and after studying his physique and technique, Leo locks himself in combat against the Specter, vowing to surpass his power. Furious for revenge, Regulus reveals then to the Wyvern, that he is the son of Leo Ilias, the man who broke off his horn. Regulus reminisces about the quiet life he shared in the past with his father Ilias and engages the Specter without restrain. As Wyvern has attained divinity, Regulus is in clear disadvantage, expecting to revert the situation, he performs the devastating Athena Exclamation unassisted, which he learned from his mentor Sisyphos. The Wyvern effortlessly negates the attack of the Leo, who then resorts to summon the power of the twelve constellations and combines them into a single attack, releasing it as a concentrated shockwave known as the Zodiac Clamation. Regulus is consumed by the explosion, which the Wyvern survives unscathed. Having become an incorporeal entity, Regulus attacks the Specter once again, with the potent Lightning Bolt. Having inflicted his final attack on the Specter, and fulfilled his destiny as a Saint, Regulus rejoins his father in the afterlife.

A tactical genius, he is able to adapt to any situation in combat quickly, observing the capabilities of the opponent. 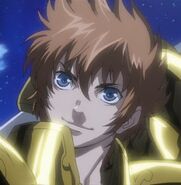 Retrieved from "https://saintseiya.fandom.com/wiki/Leo_Regulus?oldid=52508"
Community content is available under CC-BY-SA unless otherwise noted.