Alberich is the nineteenth descendant of the lineage of the Megrez, all divine Delta warriors. His intelligence has caused some tensions with peers and Hilda herself, who had asked him to work for the joy of others, and not for selfish desires. He has the distinction of being the only God Warrior who harbored a secret ambition to dominate Asgard. He was present at the time Hilda was dominated by Poseidon through the Nibelungen Ring. He immediately noticed the change in Hilda's personality, so when the time came to fight, his only goal was to collect the seven Odin Sapphires to kill Hilda himself using the Balmung sword. Despite his apparent weakness, he defeated Marin, Seiya and Hyoga. Shiryū managed to counter Alberich's Nature Unity attack with the help of Libra Dohko(who had fought with one of Alberich's ancestors) and kills him.

Amethyst Sealed(アメジスト・シールド, Amejisuto Shīrudo): A technique where Alberich fires a bevy of amethyst crystals at his opponent, resulting in the amethysts joining together and trapping the opponent in a coffin of amethyst that slowly drains the life away from them. This technique can only be undone if Alberich is killed.

Unity of Nature (ネイチャー・ユーニティ, Neichā Yūniti, "Nature Unity"): This technique was created by Alberich XIII, an ancestor of Alberich. It involves Alberich using his Cosmo to manipulate the spirits of nature itself to attack his opponent with his surroundings. The only way to counter this technique is to stop moving and become one with nature.

Sword of Fire (炎の剣, Hono no Ken): Alberich has a sword that he creates at will. It's composed of a crystalline substance and generates its own flames. Alberich can freely control the flame and use it to burn the surroundings. Not even Hyoga's Diamond Dust could extinguish the Sword of Fire. 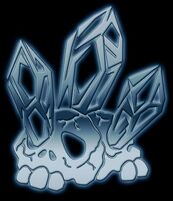