Merak Beta Hägen (ベータ星メラクのハーゲン, Bēta-sei Meraku no Hāgen) is one of the seven Gods Warriors of Asgard. This character appears only in the anime adaptation of Saint Seiya.

Hägen is a young noble, Freya's childhood friend, and the best friend of Siegfried. In his youth he showed a remarkable preference for Freya, ultimately falling in love with her. To protect his beloved, he trained in a deep cave of lava to become the strongest warrior. However, upon learning that Freya had left Asgard with Hyoga, he flew into a rage and chased the Cygnus Saint, in an apparent fit of jealousy. During the fight between the two, Hagen used Universe Freezing to imprison Hyoga in a block of ice before leaving. Surprised when Hyoga managed to break free, Hagen countered Hyoga's Aurora Thunder Attack with the fiery Great Ardent Pressure, much to the Cygnus Saint's shock who noted Hagen's ability to use attacks of both ice and fire. Hagen tricked Hyoga into stepping into the magma cavern he trained in.

The intense heat terribly weakened Hyoga as he was repeatedly assaulted by Hagen's Great Ardent Pressure attack. Freya's arrival prevented Hagen from throwing Hyoga into the magma, but he had stubbornly convinced himself that Hyoga had put Freya under a spell. A jealous Hägen, noting Freya's protection of Hyōga, did not hesitate to attack him with all his might in spite of Freya's plea to stop fighting. Furious at Hagen's disregard for Freya's feelings, Hyoga used his Aurora Execution attack, which Hagen tried to counter. Hagen ultimately couldn't compete with Hyoga's might and was sent flying into the air and killed. Freya, after waking up and realize what happened, wept bitterly over the departure of her friend. Kiki soon arrived as a remorseful Hyoga stated the emptiness of his victory.

Being a mighty warrior of Asgard, Hagen forms the line of the three strongest God Warriors along with Siegfried and Syd. His powers dominate both the cold and heat: 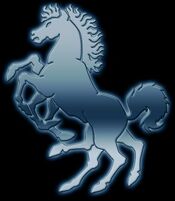