Ophiuchus Odysseus is a character in Saint Seiya: Next Dimension.

At the time of myth, to the sanctuary of Athena, between the house of Sagittarius and the Scorpion, there was that of Ophiuchus, guarded by the Gold Saint of Ophiuchus, who was considered the best among the 13 gold saint, and had even power to heal all kinds of wounds and diseases.

The Ophiuchus Gold Saint is a Saint who has reached an almost divine power, which is why the gods have punished it and sealed it away. According to Shijima and Cardinale, this saint is since dead.

Odysseus is the reincarnation of Asclepius of Ophiuchus, the 13th gold saint mythological era which was the most powerful of the 88 saints of the goddess Athena.

Ofiuco's house has two enormous Stone Snakes in entrance, this temple is gigantic, much larger than the other 12 houses of the Zodiac of the Sanctuary of Athena.

Odeysseus had died saving a young Dohko and Shion from falling debris and magma during a volcanic eruption. He has since been resurected to "kill" Athena.

Odysseus has returned to life in the eighteenth century, crosses the 12 temples of the zodiac, facing each time their guardians, the Gold Saints. He helps (when there is need) the Gold Saints both physically and psychologically, making them all become the devoted and faithful Saints of Athena.

He has silver hair, wears blue and red eyeshadow. His eyes are green in their regular shape, but turns yellow or red and his pupils changes into an elongated lines with a severe stare.

According to Gemini Abel and Odysseus himself, he does not have any offensive attacks, as his duty is to heal not harm. As Odysseus himself shows us, he is a doctor and can perform any kind of surgical operation and of medicine, such as heart transplants, neurosurgical operations, ect, it can even completely rebuild the human body. During its crossing of the 12 houses, it is shown that many of the 12 Gold Saints' techniques have no effect against Odysseus. 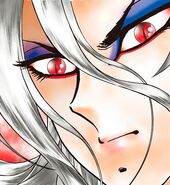 Ophiuchus Myth Cloth EX prototype by Bandai
Add a photo to this gallery
Retrieved from "https://saintseiya.fandom.com/wiki/Ophiuchus_Odysseus?oldid=53449"
Community content is available under CC-BY-SA unless otherwise noted.