Pandora (パンドラ, Pandora) is Hades' sister in this life time. She was born at Heinstein Castle as the first daughter of the German noble Heinstein family.

At a young age, while strolling through the castle's park with her dog Adolf, she saw a builiding she never knew of its existence. This derelict building was surrounded by a dead garden, and was shut by a heavy lock. The lock opened itself, and inside this building she found a box with a Seal of Athena. Pandora broke the seal, and the souls of the gods Hypnos and Thanatos were released. She was told that Hades will become her brother and she must protect him until the final battle begins, if she would, they would grant her eternal life. When Hades was born, all lives at Pandora's house began to die except herself.

Then she became Hades' servant, commanding his armies of Specters through the invasion of the Sanctuary during the XX Century Holy War. She is completely loyal to Hades, at the point of being capable of torturing Wyvern Radamanthys when she discovered he had disobeyed Hades' orders and sent Specters to the Sanctuary to watch over the resurrected Gold Saints.

As a result of this servitude, she lost the ability to see fully in color, seeing only shades of gray. Hades gave her a necklace that allows her to travel through different realms (she can travel between the world of the living and the Meikai, and even to Elysion). She has a complex relationship with Ikki due to their past regarding Shun

When the invasion of the Sanctuary failed, she returned to the Underworld. She remained there until the twelve Gold Saints breached the Wailing Wall, and Seiya, Shun, Shiryu and Hyoga crossed the Hyperdimension to Elysion. Pandora confronted Ikki but, after seeing the Phoenix's iron will, she gave him the necklace, which allowed him to travel to Elysion alive. As a result of this, she regained color vision. However, Thanatos saw her as a traitor and used his divine powers to kill her, dying in Ikki's arms.

In Lost Canvas she is depicted as being so attached to Hades to the point of hysteria and paranoia (Hades defined himself "a bird in a cage"); nevertheless she is a merciless and loyal servant of the god of the Underworld. She used to be a pawn of Hypnos and Thanatos' (whom she was frightened by) schemes, which often put her against

her own beliefs and wishes, prompting her to seal Hades away so as to keep him focused on painting the Lost Canvas.

Pandora is crushed upon learning that it had been Alone, not Hades, who had been at her side since they met. With her heart full of sorrow, she departs to find the true Hades, and to punish Alone, whom she hates. She last appeared mobilizing Hades' army, after the defeat of Bennu Kagaho, later, she is enraged by Harpy Valentine's defiance, and aiming to break his will by means of torture, she performs her Noble Venom (ノーブルベノム, Nōburu Benomu) technique on him, which induces excruciating pain. Her attack is negated by the Specter and she is then the victim of his attack; however, she manages to break free and overwhelm Valentine, who is later punished by Rhadamanthys. Pandora then accepts the Underworld commander's apology and afterward encounters Athena, who before engaging her in battle, resurrects her Cloth and dons it. Pandora is later shocked momentarily by the memories Athena caused to flood her by reaching into her heart. She finds out Tenma is Partita's son, her only friend during her childhood. However, years ago, Pandora thought Partita had stolen Hades' soul from his mother. Desperate and confused, she sent the Skeleton soldiers to kill Partita and the newborn Tenma. Yōma then relishes in torturing Pandora psychologically by revealing her that she killed Partita for a crime she never committed, and Partita then embraces her as if to provide her with consolation, only to inflict a murderous stroke instead, which she was able to survive. Pandora then arrives to Uranus and prepares to kill Partita. She is overpowered by the Specter and is mortally wounded by her intense Cosmo burst. Pandora's is then held by Tenma, who protects her by absorbing the impact of Partita's second Cosmo burst with his body. The moribund young woman bears witness to mother and son's battle. After the battle, Pandora reincorporates and sets out to find Alone.There has been speculation that Pandora loved Ikki, as she was seen tenderly comforting/touching the wound that had been inflicted on him.

Like Athena, she has no physical strength in battle, but her cosmos alone is at a deity's level. She wields a trident capable of firing bursts of energy powerful enough to break a Golden Armor, and create explosions of cosmos capable of preventing an attack of a god. But mainly, her main weapon is the harp, whose music is capable of torturing anyone who listens, she is also in possesion of a ring that materialize serpents to hold her opponents. When forced to escape, her speed is almost comparable to that of Leo, teleporting at the speed of light to anywhere she wants.

Pandora along with Hades and Rhadamanthys 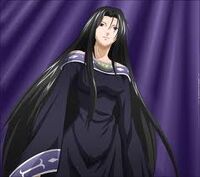 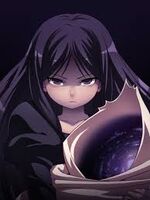 Young Pandora with the Soul of Hades.

Pandora attacking with her staff 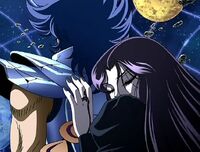 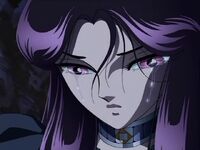