Sanctuary
The Pegasus Cloth is one of Bronze Cloths.

The Pegasus Cloth is based on the famous winged horse, Pegasus, a child of the sea god Poseidon and the monster Medusa. Originally a beautiful mortal priestess of Athena, Medusa rejected Poseidon's advances; the jilted god then proceeded to rape the girl on the floor of Athena's temple. For this defilement, since Athena could not punish Poseidon, she instead punished Medusa and her sisters, turning them into the monstrous Gorgons. Medusa herself was able to petrify people with a glance. She was sought and killed by the hero Perseus, who decapitated her with a sword. As she died, having been pregnant, she gave birth to Pegasus and his brother, the golden warrior Chrysaor.

Pegasus roamed free until the hero Bellerophon is sent on a quest by a neighboring king to kill the Chimera, another monster with the body parts of lions, snakes and goats, that breathed fire. However, the Chimera could only be successfully assaulted by air. Worried, Bellerophon goes to sleep in Athena's temple, hoping she would pity him; the goddess indeed advises the young man in a dream and provides him with a magical bridle, telling him to seek out Pegasus. After awakening the next morning and obtaining the item, Bellerophon successfully slips the bridle onto Pegasus, taming the winged steed. He rides Pegasus through the air, killing the Chimera with a hail of arrows. Despite being rewarded by the king for this heroic deed, Bellerophon feels he deserves the glory of a god and, in an act of hubris, attempts to ride Pegasus up Mount Olympus. Seeing this, Zeus became angry and threw a thunderbolt at Bellerophon, knocking him off his horse and crippling him for life. Pegasus flew on, and was placed among the constellations by Zeus.

Although mythologically connected more to Bellerophon, in popular culture Pegasus is depicted as the steed of Perseus (who was originally responsible for his birth and the death of the horse's mother).

Pegasus God Cloth (TLC)
Add a photo to this gallery 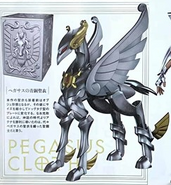 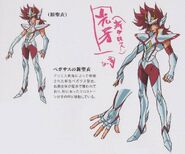 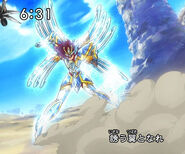 Pegasus Omega Cloth full view
Add a photo to this gallery
Retrieved from "https://saintseiya.fandom.com/wiki/Pegasus_Cloth?oldid=54576"
Community content is available under CC-BY-SA unless otherwise noted.