Seiya (星矢, Seiya) also known as Pegasus Seiya (天馬星座の星矢, Pegasasu no Seiya) is the title and main protagonist of the Saint Seiya manga and anime series written and illustrated by Masami Kurumada. Seiya is one of Athena's eighty-eight mythical warriors known as the Saints who are serving their goddess throughout the ages, protecting justice and peace on Earth. Seiya is also one of the forty-eight Bronze Saints and is protected by the Pegasus Constellation so he wears the Pegasus Cloth.

Seiya and his sister Seika were both orphans living at a orphanage. Six years before the start of the series, Seiya was separated from his sister to train in Greece to participate in the Galaxian Wars. In Greece, Seiya gets training from Marin and gets bullied by Cassios.

In battle, Seiya proves to be exceedingly cunning. When odds are against him, he musters up a way to pull through. He's confident, courageous and determined. As expected with these traits, he can come across as stubborn and naive at times, but he is only following what feels true to his heart.

He's all those things while also being merciful. He displays this behavior as early as the original episode "Miracle of Rebirth! Friendship of the Cosmos". His kindness is also what draws people to him, but he is far from mellow and very capable of expressing passion and anger.

Seiya was escaping from the Sanctuary but was soon found by Marin. Marin asks him to come back to the Sanctuary to finish his training simulations. Seiya refuses it saying that he had enough of it, but Marin reminds him that he has to battle with Cassios tomorrow. Seiya then shouts to Marin saying that she must tell him something he don't know because he know that he can defeat him. Marin explains Cassios strength which Seiya tells Marin that he can defeat him thanks through the special training Marin gave him, but Seiya has to prove it to Marin which he is showing his center of his Cosmo which Marin is impressed by it.[1] The day of the battle between Seiya and Cassios has begun which Cassios started to attack Seiya without Seiya paying attention to him. Seiya defeated Cassios and earn the Pegasus Cloth. After that Seiya won the Pegasus Cloth, Seiya was trying to open the box, but Marin tells him not to because the myth have been linked to the Pandora's box. Later, Seiya asks Marin why they are running away from because Seiya wanted to leave the Sanctuary and go to Japan tomorrow, but Marin tells Seiya that he is already going to die by tomorrow.

Shaina appears in front of Seiya and Marin, which she started to attack Seiya out of anger that he won the Pegasus cloth. Seiya then battles with Shaina until Seiya opens the box of the Pegasus cloth, which the battle continues between Seiya and Shaina. The guards of Shaina appears apologizing to her that she got personally involved in the situation, while one guard is trying to beat up Seiya he feels that Seiya's armor starts to unleash heat. Seiya defeats the guards with his Pegasus Meteor Punch technique[2]. The air pressure of the technique was enough to break Shaina's mask in two, when Seiya tells Shaina that her face has been revealed thinking that she had the face of a monster, Shaina tells Seiya that the next time they meet again she will wear her cloth and challenge Seiya. Seiya then tells her that he hopes that the day will never come. After the battle, Marin show Seiya the way and asked him if he had some final words, Seiya asks if Marin can show her real face before he leaves.[3]

While being in the process of creating Saint Seiya, Masami Kurumada first intended to give Seiya the name Rin. It is known that Masami Kurumada orginally wanted to name the series: Ginga no Rin (銀河の輪; Literally meaning "Rin of the Galaxy"). As Kurumada continued developing his manga, he decided to change the name to Seiya, which he though that it was more fitting for the main character and the series. Kurumada first spelled Seiya (星矢; Literally meaning "Star Arrow") with kanji to relate it to Seiya's condition as a Saint, but has changed his mind which the name Seiya pointed to emphasize the constellation and mythological motif. Kurumada changed the name of the manga into Saint Seiya (聖闘士星矢（セイントセイヤ）, Seinto Seiya) after that he fully developed the concept of the Saints. Since his manga was going to use the constellations as a very important and ever-present theme, he wanted his protagonist to have a special move that would be like a shower of meteors. Seiya drew inspiration from Kurumada's previous popular manga: Ring ni Kakero (リングにかけろ; Literally meaning "Applied to the Ring") from the main character: Ryūji Takane (高嶺竜児, Takane Ryūji).

Seiya is the least popular character in Japan of the main characters of the Saint Seiya series. In the Bronze Saints character poll, Seiya was ranked fifth. Seiya's techniques however has been ranked high, as known that Seiya's Pegasus Meteor Fist in the technique poll has been ranked first. Seiya also gets criticized for being a "underdog" in most of the battles. 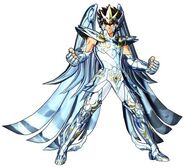 God Cloth
Add a photo to this gallery

Retrieved from "https://saintseiya.fandom.com/wiki/Pegasus_Seiya?oldid=54019"
Community content is available under CC-BY-SA unless otherwise noted.