Perseus Algol (ペルセウス座のアルゴル, Peruseusu-za no Arugoru) is one of the Silver Saints sent to kill the Bronze Saints in the Sanctuary Arc.

In the manga, he was sent by the Santuary's Grand Pope as the leader of the second group along with two Silver Saints, Kerberos Dante and Auriga Capella, to finish the job of the failed first group to kill the Bronze Saints. After Capella was killed by Phoenix Ikki's Phoenix Genma-Ken, Ikki decided to leave, but gave the remaining Bronze Saints a bit of warning, stating the Algol is not the same as the other Silver Saints. Algol states that he could defeat all of them with the power of his Medusa Shield, and turns Shun into stone. Seiya, who took a fall earlier to protect Saori, was critically injured, and Shiryu stated that he must be given medical attention quickly. Algol then uses his shield on Cygnus Hyoga and Shiryu, turning the former Bronze Saint into stone.

His appearance in the anime differs from the one on the manga, since he's accompanied by Ophiuchus Shaina and Spartan instead of Dante and Capella. In the anime, Algol is first seen when some kids were trying to run away from the Sanctuary but they are stopped by Leo Aiolia. Shaina and Algol then shows up saying to Aiolia that they should be killed for trying to escape. Algol then says that he will let the kids go since has his back turned. Aiolia realizes what is happening and tells Algol to stop but he is too late as his medusa shield then petrifies the kids turning them into stone. Later, Algol and his companions set up an ambush for the Bronze Saints that were headed towards the Sanctuary, by making their plane fall into an island. Seiya, Shun and Shiryu, who were on the plane, started fighting Shaina, Algol and Spartan, respectively; Seiya managed to defeat Shaina and when Algol tried to go after Seiya, Shun got in the way and he gets turned into stone. While Spartan goes to help Shaina, Seiya and Shiryu prepare to fight Algol, but the former is turned into stone as well.

However, Shiryu was not affected by this technique and told Algol that he used his shield to protect himself. He declared that he would defeat Algol to break the curse on his fellow Bronze Saints. Shiryu used his Rozan Shoryu Ha against Algol, but Algol evaded most of it, stating that he avoided it easily because Shiryu could not look at him and his technique was not aimed well. In the anime, there's a part where Spartan appears behind Shiryu and subdues him, trying to make him look into the Medusa Shield, but Shiryu manages to break off free and Spartan gets turned into stone instead.

Thinking of the legend of how Perseus slayed Medusa, Shiryu decided to use his shield as a mirror, but Algol's movements were too fast, and he could not keep track on it. He must also use his shield to protect himself from Algol's attacks and the Medusa shield, keeping him from fighting back. Shiryu then decided rip a piece of his shirt off and use it as a blindfold, hoping that it would protect himself from the attack. But the Medusa Shield still worked despite the blindfold and turned the left half of his body into stone (hence he could not move or use his shield).

Knowing that Shiryu is now defenseless, Algol was about to use his shield on Shiryu. However, Shiryu hit his eyes with his fingers, not piercing them, but effectively blinding himself, so that he could no longer see the shield of Medusa.

Although shocked by his action, Algol stated that he could defeat him without the shield of Medusa. Shiryu charged up for his attack, and stated that he could see clearly now - not the shield of Medusa nor Algol, but the power of Athena guiding him to victory, and unleashed his Rozan Shoryu Ha, defeating Algol. Shiryu stated as Algol fell that his actions were not just for the victory now, but also to protect his friends.

After Algol was defeated by Shiryu, the Saints Shun and Seiya turned back to normal.

Later, in the anime adaptation, Algol, along with Auriga Capella and Kerberos Dante, was resurrected from the dead by Hades. After being resurrected, all the three saints were using new cloths, the surplices, made of the same material of that of the specters. The new cloths look like the old Silver ones, except by the color, and perhaps they don't have the same powers, as Medusa Shield wasn't used or even commented at this time.

They were sent to kill Shiryu and Dohko. They arrived on the waterfall of the Rozan mountains to complete their mission. However, Dohko wasn't there, as he left to the Sanctuary to fight against the specters. They attacked Shiryu, and after a short period, Shiryu defeated all them with his Rozan Shoryu Ha.

After they were defeated, Shiryu left to the Sanctuary to help Dohko.

Ra's Al Ghul Gorgonio (ラスアルグールゴルゴニオ, Rasu Arugūru Gorugonio, lit. 'Head of the Ghoul Gorgoneion'): This is an offensive technique used by Perseus Algol on Dragon Shiryu. Perseus Algol leaps high into the air while he creates an illusion of tons of serpents and forces himself into his victim with a mighty kick.

Algol hides the Shield of Medusa on his back

Algol attach the Shield of Medusa in his arm

The Shield of Medusa

The Shield of Medusa close up 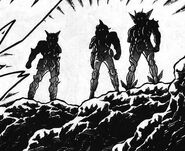 KotZ Netflix: Medusa Shield opening the eyes in red glow
Add a photo to this gallery

Retrieved from "https://saintseiya.fandom.com/wiki/Perseus_Algol?oldid=53486"
Community content is available under CC-BY-SA unless otherwise noted.