Albafica - A mysterious person. He is quiet, calm, lonely; but not because he wants so, but because he has to. He has a very generous heart. He isolates himself, creating the image of a cold but loving man who lives in solitude. Albafica tries to avoid approaching, touching and even talking at all costs, to protect others from contact with his blood, which became extremely poisonous due to prolonged contact with poisonous demon roses.

While still a baby, Albafica was abandoned in Pisces Lugonis's garden of Demon Roses, which would have been fatal to any other living being. Yet, even being so young he resisted, and was found and adopted by Lugonis, who became his teacher.

Ritual red ribbons of blood is between a Saint of Pisces and his pupil. Exchanging a drop of blood from a wound made in the fingertips of each of them in this ritual, the transmitted blood circulates in their bodies and the ceremony is held for a few years. If the receiver however, is unable to resist the poison of the Pisces, they will suffer a terrible death. Even if they are able to support the poisoned blood, they must expect a life of solitude. Albafica performs the ritual with his teacher Lugonis for a few years, giving up a chance for a normal life. At first, the poisonous blood of his master only burned his body and caused him severe pain, and on several occasions, Albafica was near death, but still somehow survived on each blood installment. Eventually, his body grew stronger and became used to the poison dwelling within it. Albafica and Lugonis shared the same poison in their blood, making them even closer more than a father and son as he said the Ghost.

Albafica at times thought it was an absurd notion, however, he started to take notice of his master's weakening condition, and after a particular blood exchange, Lugonis fell dead, but before he passed away, he told Albafica that it was unavoidable that the student's poison had surpassed the teacher's, up to the point where it was strong enough to kill him. He then explains the fate of a Pisces, to spend a life away from men.

Once Albafica was a Gold Saint, the Pope Sage entrusted him with the task of exploring the Healer Island for possible specters. Albafica travelled to said island and met the healer, a man with the ability to heal any disease known to man, he even offered to cure the poison in Albafica's blood. Later it is revealed that this man is the brother of Lugonis, Dryad Luco , who uses the flowers from the underworld to heal the ill. Those very same flowers left the Pisces Saint in a vulnerable state. Luco and Albafica then clash, but the specter's ability to control all types of plants gave him momentary advantage and was able to use his own Piranha Rose against him. Albafica then deploits his technique Crimson Thorn to destroy Luco, deafeating the specter and restoring peace and calm to the island. After the mission, Albafica would stop being cold and evasive, especially around Aries Shion (TLC) who always showed sympathy.

In another mission, Albafica accompanied on his mission to Cancer Manigoldo against the Black Saints in Italy. Faces Albafica Black Crow's Ruse who confronts the Royal Demon Rose with Black Feather Defense . Black Crow uses Defense of Black Feathers transport a Albafica to Yomutsu Hill, along with Manigoldo and Gioca , Black Hounds Judo believes that will be safe from the roses and blood poisoned Pisces, however Albafica attacks him with his fists defeating, Black Crow subsequently killed by Black Altar Don Avido . Once in the mortal world with apparent ease Albafica defeat to Black Heracles Lemargos and Black Hounds Judo , kills them both with his Bloody Rose . Then both saints return to the Sanctuary.

After the awakening of Hades in the body of Alone, Pandora sends Griffon Minos to invade the sanctuary with a group of specters. Albafica goes forward and leaves his position in the last of the twelve houses to create a rose garden poisoned to keep the Specters away from the Sanctuary and the village, Rodorio. The trap works and kills several of the specters, but as Deep Niobe ends his attack the roses Deep Fragrance, which makes Albafica immune to the poisonous scent of roses, so Albafica kills him using Crimson Thorn.

Then Minos gets rid of the roses with his ​​Gigantic Feathers Flap, and paralyzes Albafica with Cosmic Marionettion, letting his specter, including Necromancer Byaku, move towards the Sanctuary, with the order of destroying the village Rodorio on their way. Luckily, they fall away, because Albafica had placed his Bloody Roses by the way, claiming the lives of all specters accompanying the Judge of Hell .

Although Albafica uses the Crimson Thorn against Minos, he rejected it without any problems, and torturing Albafica saying that someone so beautiful should not focus on fighting. After an endless torture, Minos uses his power to break every bone in Albafica's body, which after this attack presumed he is dead.
Albafica still gets to his feet and once again challenge Minos when he was about to destroy Rodorio. Albafica reuses the Crimson Thorn, this time with all the blood, although it is just a distraction, as his real attack is a stab in the heart of Minos with one Bloody Rose filled with Albafica poisonous blood, something that Minos does not realize until too late. After defeating Minos, Albafica dies, finally finding peace with the poisonous roses that marked his life.

There are notable differences and similarities between Pisces Albafica, and Pisces Aphrodite in terms of personality and battle tactics. 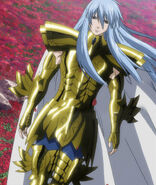