Pisces Aphrodite is the last of the Gold Saints introduced by Masami Kurumada in his manga, formally presented in vol.11. Aphrodite was a Saint famous not only because of his beauty, but also for his reputation as one of the strongest among the 88 Saints. He is the saint of Pisces, and uses roses as his attack.

Aphrodite is a man of medium stature and fair skin. He has blue eyes and long blond hair (light blue in the anime). Under the left eye, Aphrodite has a speckle. It is said that its beauty shines between heaven and earth and that there is no one more beautiful than him amongst the 88 Knights. Aphrodite is masculine in character and speech in the manga with a robust physique. But in anime he wears lipstick and behaves a little feminine.

The aside stated that Aphrodite's beauty was the greatest among Athena's Saints (even though it's not stated by the pope Pope, as in anime) However, Aphrodite has a masculine character and never claimed to be the most beautiful creature, unlike the Silver Saint, Lizard Misty who claimed that even the stars' splendour dimmed next to his glory.

Some casual fans believed Aphrodite is a female because of his name and his appearance in anime and other spin-offs(rather than the manga). In the French, European Spanish -first dubbing of the anime adaptation, he is voiced by a female actress.

In tEpisode G Assassin, Aphrodite as a civilian wears a long red dress with a low back, long black stockings and shoes with red heels that have what appear to be "pompoms" of the same color. In the spin off Soul of Gold, Aphrodite wears a typical French outfit with a bohemian with a pink blouse, a dark tie, white pants and dark shoes with heels.

Tough and candid, Aphrodite is taciturn and blunt in the original manga, which is totally different in the anime version in which he is suave and ironic. It is notable that despite his incomparable beauty, Aphrodite is not narcissistic, because he never exalts his own beauty, which is only commented on by third parties. Instead, Aphrodite is sadistic, and often described as cruel as his fellow Gold Saint, Cancer Deathmask, but not as ironic and sarcastic. According to Saga, despite his good looks, Aphrodite is the most feared of all the 88 Saints of Athena, due to his sadistic nature and to his fighting power.

His reputation is supported more in Episode G when Aphrodite appeared in front of the Titan's soldiers who were awe-struck due to his beauty but also paralyzed by fear in his presence. he is depicted as a man who believes power is justice. Subscribing to this faith, he believes the weak should be dominated by the stronger. such as Pope and the Gold Saints.

In the Hades arc, he shows loyalty to Athena and great courage by accepting the risk of being seen as a traitor by his companions, deciding to be part of Shion's plan. Despite his twisted idea of absolute justice, Aphrodite is not the type to back down, and stands firm in what he believes.

Kurumada named him after the Greek Goddess of love and beauty as a reference to the Greek myth associated with the Pisces constellation. It's not known if Aphrodite is his true name or a nickname.

By the age of 9, Aphrodite had already become a Gold Saint, wearing her armor at such a young age just like other "young" Gold Saints.

13 years before the events of the original manga, Aphrodite is present when Athena reincarnates in front of the Statue of Athena. After Saga's disappearance, he, Deathmask, Aiolos, and Shura remain in the Sanctuary while the other Saints leave to train. Aphrodite is the first Saint to face Aiolos during his escape. Aphrodite refuses to listen to Aiolos' explanations and attacks him. Aiolos does not defend himself so as not to harm Athena and restrainshis movements with the Shadow Arrow to cross the temple.

Later, just outside the sanctuary, he, Shura, and Deathmask try to stop Aiolos from crossing a bridge. Shura destroys said bridge, in spite of the complaints of him and those of Deathmask, eliminating Aiolos.

After the Titans' gate is discovered, he cover the entrance of the Time Labyrinth with his deadly roses so none may cross it. Aphrodite saves the defenseless Leo Aiolia from the attacks of the followers of the Titans. After an argument between the two Gold Saints, since Aiolia was against Aphrodite's bloodlust, the Giant Anthrakma Zugylos (Ruby Iron) appears. Aphrodite saves Aiolia from Zugylos's deadly mace and kills the Giant. He returns to Sanctuary afterward, leaving behind a carpet of vines and roses at the exit of that world to prevent an invasion on Sanctuary.

Under the alias of Dora Tephi, Aphrodite assumes the role of Yoshino Hino's bodyguard. While waiting for Shura to meet them at Atami, Shizuoka, they are confronted by two Gladiators: Aparajita Trivikramasena and an unnamed Gladiator with a reconstructed half body. Shura confronts Chakravartin, while Aphrodite defeats the second Gladiator.

Pisces Aphrodite faces the last two Bronze Saints remaining: Pegasus Seiya and Andromeda Shun. Shun stated that he would hold Aphrodite off, while Seiya manages to pass through the temple. Aphrodite steady tells Shun that even if Seiya passes through the temple, the Demon Roses on the road would make Seiya eventually lose his senses and die. As the two engaged in battle, Aphrodite stated that he was the Gold Saint who attacked Andromeda Island and killed Shun's master, Cepheus Daidalos. Having been told of this by his friend Chameleon Juné, the shy Andromeda Saint had vowed beforehand to defeat the man who killed his beloved master.

Using his Rolling Defense, Shun managed to repel of all Aphrodite's Royal Demon Rose attacks. However, when Aphrodite used his Piranha Rose on Shun, his Nebula Chains and Bronze Cloth were shattered. Although he seemed to be defenseless, Shun remembered that his master, Cepheus Daidalos, mentioned that within him lied an extremely powerful Cosmo, normally restrained by the Andromeda Cloth. This power could only be awakened when not wearing the Cloth. Using the power of his hidden Cosmo, Shun performed a secret attack: Nebula Stream, which he used to restrain Aphrodite. However, being merciful in nature, Shun gave Aphrodite a chance to repent, to embrace again the path of virtue as a Saint should, especially one who possessed the honor of being a Gold Saint.

Aphrodite showed no intention to do so and prepared his strongest attack, the Bloody Rose. Shun was forced to counter with his final attack Nebula Storm, and ended the battle by killing Aphrodite, but not without being struck in the center of his heart by the Bloody Rose, falling into a near-death state. The Bloody Rose was true to its name as it was draining all the blood from Shun's heart. It was not until the start of the Poseidon arc (and in the anime-only Asgard arc) that he was nursed back to health.

The deceased Gold Saints were revived as Specters by the power of Hades, and, led by the Specter of the former Pope, Aries Shion, they were sent to Sanctuary to assassinate Athena. In the first Temple, Shion was stopped by Aries Mu. Shion orders Cancer Deathmask and Pisces Aphrodite to defeat Mu so they could continue their mission. However, neither Gold Saint was able to defeat the Aries Gold Saint and Mu quickly beates down Deathmask by force(Deathmask cries out in a slightly feminine tone) and banishes both the evil Deathmask and the fatuous Aphrodite with his Starlight Extinction. Giving the expression to be killed (In reality Mu send them both to Hades castle) Since the start, neither Deathmask nor Aphrodite were using their true power as it was not their intention to kill Mu. Back in Hades' castle, leaded for mercy to Wyvern Rhadamanthys(in manga Deathmask never fights with Rhadamanthys, but kneels and begs for life in somewhat a effeminate way) and Rhadamanthys throws Deathmask and Aphrodite back to the underworld. Later on, it was revealed that Deathmask and Aphrodite were secretly on Athena's side, along with the rest of the deceased Gold Saints, and were asked by Shion to pretend to follow Hades' order (in the Anime adaptation the same scene is adapted, after Shion asked all the dead Gold and Silver Saints to pretend to follow Hades' order, Aphrodite smiled and Deathmask also grinned. Shion then thanked all of them for carrying the burden of the traitor's branding in pretending to betray Athena).

In the final gathering of the 12 Gold Saints at the Wailing Wall, Aphrodite's spirit and the Gold Cloth of Pisces appeared to help open the gateway to Elysion, where Hades' true body lies. After this, his spirit and Cosmo disappeared, and all that was left of him was the Pisces Gold Cloth which remained.

He is resurrected along with other golden saints by the god Abel. Later, Aphrodite confronts Shun, initiating combat with her Royal Devilish Roses, which are repulsed by Shun's chains. When Shun was about to be struck by Aphrodite's roses, he is saved by Ikki, who attacks the Bloody Roses. Aphrodite casts a Bloody Rose on Ikki, however, it is destroyed Ikki's illusions, which makes Aphrodite see his body being petrified. Annoyed, Aphrodite attacks Ikki with several Bloody Roses, but Phoenix strikes back. Then Aphrodite dies because of Bloody Rose stuck in his heart.

Aphrodite appears alongside with other Gold Saints in the meeting organized in the Temple of Athena, where the Grand Master speaks to the many Knights and inhabitants of the Shrine of Athena on Saori Kido, who had been delivered to the care of Mitsumasa Kido by Aiolos of Sagittarius for 16 years. Subsequently, the Knight of Pisces appears in the Grand Master's Hall in order to protect Athena, where he is struck by the Other Dimension of the Knight of Gemini. In his last appearance in the film, Aphrodite falls unconscious on the road outside the House of Sagittarius.

Aphrodite and the other Golden Knights, have their souls sealed, after their deaths on the Western Wall, as punishment for having rebelled against the gods, only being able to observe the Bronze Knights.

As a Gold Saint, Aphrodite has he 7th sense, hence he can move and attack at the speed of light. But he is good at physical fight and doesn't show any psychic abilities like telekinesis and telepathy. At the end of the Hades' arc, it is hinted that Aphrodite was able to use the 8th sense as well, allowing his soul to move freely on the underworld without being subject to its laws.

In Saint Seiya: The Lost Canvas, it is revealed that the Pisces Saint is immune to poisons due to the fact they live close to the road of royal demon roses after the Pisces Temple. Even so, Aphrodite's main power remains on his ability to uses his Cosmo energy in order to use different kinds of roses.

He has the following techniques:

In Saint Seiya Episode G, Aphrodite is able to create and manipulate large rose's vines. So far, he used them to refrain and strangle his targets, create massive vine blades that slaughter the enemies (Aphrodite himself claims that his enemies' blood will dye red the white roses by reaching the ground and being absorbed by them) and to create defensive cocoons to protect and heal his or another person's body (through his Cosmo energy).

Aphrodite's guardian constellation is Pisces, and his Gold Cloth represents it and its associated myth: The goddess Aphrodite and her son Eros when they transformed into fish to escape the murderous Typhon.

The temple he guarded was known both in the manga and the anime adaptation as SouGyoKyuu, the "Temple of the Twin Fish". 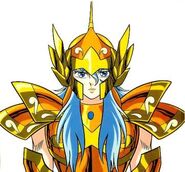 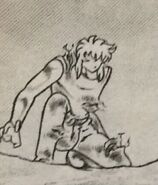 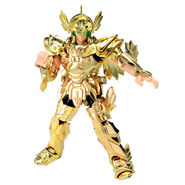 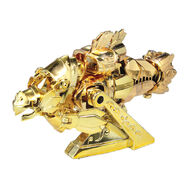 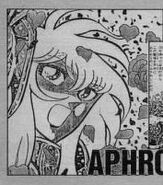 Aphrodite in Soul of Gold