Greece, Sanctuary
The Sagittarius Cloth is the cloth of the Saint Aiolos in Saint Seiya and Saint Seiya: Episode G (and briefly worn by Seiya in the Original Series), Sisyphus in Saint Seiya: The Lost Canvas and Gestalt in Saint Seiya: Next Dimension. It is of the highest class of the cloths that Athena's Saints wield, the Gold Cloths.

The Sagittarius constellation was based on the famous centaur, Chiron. Born of the titan king Cronus (in the form of a horse) and the nymph Philyra, Chiron was a legendary centaur; a healer, a teacher, and noteably, an archer. Unlike most centaurs, he was noted for his kind and wise nature, and was the tutor of several heroes, including Asclepius, Theseus and Heracles. During a brawl he was called upon to settle, Chiron was accidentally poisoned by one of Heracles' arrows, which had been dipped in Hydra venom. Unfortunately, Chrion could not cure himself, nor die due to his immortality. Rather than live on with the pain, he willingly gave up his immortality to help in freeing the Titan Prometheus (one of the conditions for Prometheus's release was that an immortal give up their eternal life). In recognition of this, Zeus placed him in the sky as a constellation.

Aiolos trained to be a Saint in Sanctuary, years before the birth of the modern Athena, by an unknown master. The cloth was likely kept in Sanctuary until a Saint worthy of wearing it was found. During The Lost Canvas, Sisyphus was the Saint who received the Sagittarius Gold Cloth. Aiolos first appeared in volume 6 of the manga, in a flashback where he took the baby Athena and his Gold Cloth away from Sanctuary, while dying. After a fatal blow from Shura's Excalibur while fleeing, he had found Mitsumasa Kido and gave him the Cloth and baby, before dying. He briefly appeared as a spirit when Leo Aiolia fought Seiya, while he wore the Sagittarius Gold Cloth. His cloth would assist them several more times, revealing his message in The House of the Archer and to defend Seiya while he fought Poseidon. He returned from the dead in his cloth, and the other Gold Saints combined their power into his arrow to destroy the Wall of Lamentations, which ended up killing him. When the Sagittarius Gold Cloth was sent to Elyseum by Poseidon, Seiya donned the cloth, until Thanatos shattered it.

Sisyphus was the Guardian of the ninth house of Sanctuary in The Lost Canvas. In The Lost Canvas, he is the one who brought Sasha to Sanctuary to become their Athena, building a bond with her in the process. During some mission, he discovers about the Dream Gods while trying to learn of Thanatos and Hypnos. When Hades invaded Sanctuary, Sisyphus shot an arrow at him, but it was reflected, piercing his chest. On top of that, his cosmo was sealed, and the Dream Gods trapped his soul in the Dream World. He is awakened by Athena when El Cid and Tenma fight Oneiros. He shot an arrow towards them from Sanctuary after waking up, in a last ditch shot at helping the fight. He would later take the lead of the Saints. He would later fight Garuda Aiacos to defend their ship to the Lost Canvas. He gouged out his eyes during the fight, and was able to reach the Eighth Sense, his cosmo rising as well due to the loss of sight. He was able to beat Aiacos because of the growth of his power. Weakened and injured, he offers his heart to Sphinx Pharaoh, proves his purity, and kills the Specter. Dying from the injury, he combines his powers with Leo Regulus and Aries Shion to do the Athena Exclamation, forcing the Lost Canvas gates open. He dies afterwards, remembering his devotion to Sasha.

The Sagittarius Gold Cloth has a ranged weapon in the form of a Golden Bow and Arrow, made of the same material as the rest of the cloth.

Atomic Thunderbolt: Is an offensive technique used by Sagittarius Aiolos in the original anime. The technique involves the Sagittarius Gold Saint thrusting his fist forward, releasing a volley of electrically charged punches, similar to Seiya's Pegasus Ryu Sei Ken. Sagittarius Seiya inherits this technique from Aiolos in the second season of Omega.

Kheiron's Light Impulse:  Is an offensive technique used by Sagittarius Sisyphus. The technique involves the Sagittarius Gold Saint forming a golden cosmo over his wings, stretched out. He thrusts his hands forward, his wings moving forward, sending a blindingly bright light, using the pressure of his cosmo to force back the foe.

In episode 38 of the original series, the Sagittarius Cloth allows Seiya to fly. 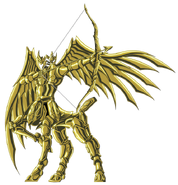 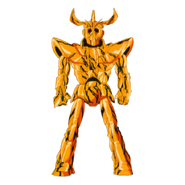 Sagittarius Cloth as shown during the Galxian Wars, assembled 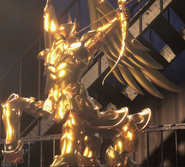