Seiyapedia
Register
Don't have an account?
Sign In
Advertisement
in: Characters, The Lost Canvas characters, Males,
and 3 more

Hades Invasion of the Sanctuary

When Hades appears in the sanctuary, calling for Athena, Libra Dohko, Aries Shion, Taurus Aldebaran and Sagittarius Sisyphus gather to defend the goddess. Sisyphus, in an attempt protect the Sanctuary as well as the goddess, fires the the Arrow of Sagittarius directly at Hades. However, Hades effortlessly absorbs the arrow with the palm of his hand and redirects the arrow back at Sisyphus, hitting the Sagittarius Gold Saint in the heart. The Evil Powers of Hades, imbued in the Arrow after redirection, was enough to send Sisyphus into a coma. Plagued by his own guilt and past memories of removing young Athena from her friends Tenma and Alone, Sisyphus' soul ventures into to the World of Dreams.

Trapped in the World of Dreams

Although seriously wounded, Sisypus physical body survives. His soul wandering the World of Dream is captured by Hypnos and Thanatos. The two deities trap him in the dimension of dreams. Capricorn El Cid, with the help of Sasha, invades where Sisyphus is the size and helps to rescue him. Later, Sagittarius Sisyphus shoots the arrow of justice to kill the four gods of dreams, who fought with El Cid and Tenma. The Gold Saint of Capricorn divides the arrow that Sisyphus fires, in mid-air, into four parts to destroy the four gods all at once but dies in the process, while defending Pegasus Tenma. After the death of El Cid, Sisyphus becomes the leader of the troops and they attempt to storm Hades' Castle. The event resulted in sealing of Hypnos, which claimed the lives of Hakurei, resulted in the apparent death of Dohko, and led to the teleportation-assisted escape of Shion, Yuzuhira and Tenma from Hades' castle. Sisyphus with his troops fall back to the Sanctuary after Hades relocates his fortress to the skies. At the Sanctuary, he waits for the Pegasus Saint to return from his training with Defteros at Kanon Island.

Sisyphus is relieved to see Tenma coming back from his training on Kanon Island with Deftros with a stronger Cosmos. The Orichalcum, Poseidon's precious metal and the key to winning the Holy War, is delivered by Unity and Athena's troops led by Sisyphus head toward Tibet, where they anticipate to restore the ship of the Previous Holy War, the Ship of Hope, with the Orichalcum. They plan to invade the "Lost Canvas" in the sky by using the Ship of Hope to sail the skies. Sisyphus and his troops meet with the resistance of specters, the opposing Ship of Darkness as well as Aiacos, the last of the three judges of the underworld. As Leo Regulus fights with Violate, Aiacos' right wing, Sisyphus and his troops prepare to protect the Ship of Hope at all costs. Taking the Judge head on, Sisyphus confronts Garuda Aiacos in the sky.

Sisyphus tries to buy time for the bronze saints as they reactivate the Ship of Hope with the Orichalcum and supports Wolf Junker's claim that their hearts are united in the indestructible bonds of comrades. Junkers goes along with Tenma, but upon further examination of the ship's insides, he questions how to get it running. Junkers explains that the ship's core must be where the Orichalcum should be placed as the Ship of Hope, built with the wood of a tree indigenous to Mount Olympus, should repair itself at that point forward. Embued with the power of the gods, the Ship of Hope tests the Bronze Saints as Sisyphus holds Aiacos at bay. Unicorn Yato runs after the them, following the order of Sisyphus but is trapped by the ship's roots. Bear Douglas saves Yato and arrives with Hydra Curtis and Lionet Bleriot. Bear sacrifices his life for everyone to pass. The bronze saints are greeted with a wall of thorns, but before Tenma ravages them, Junkers tells him it isn't a test of might. Curtis uses his body to clear a path and loses his life in the process. Tenma rushes to put Orichalcum into the core of the boat, but Junkers accepts it as his mission. Wolf Junkers is aided by the souls of his companions: Lionet Bleriot, Bear Douglas and Hydra Curtis. They unite their power and become one with the resurrected Ship of Hope.

Ship of Hope and Ship of Darkness

Unicorn Yato feels that the actions of his comrades were in vain. However, the Ship of Hope shows Yato and Tenma the images of happy, willful souls that gave up their lives fighting in the Previous Holy War as well as Wolf Junkers, Lionet Bleriot, Bear Douglas and Hydra Curtis. The Ship of Hope rises, shining with gold, which surprises both the Saints of Athena and the Specters of Hades. Sisyphus claims that the power comes from the bonds between comrades, but Aiacos laughs. Admitting that the rare sight was beautiful, he commands his crew to point the cannons of the Ship of Darkness at the Ship of Hope.

With Yato to steering the ship and Sisyphus preparing to defend it, Aiacos intends to sever their bonds. He proceeds to gloat that true power comes from the bonds of the undying loyalty of his specter crew which can only be accomplished through fear. Aiacos showers down a devastating rain of flaming feathers which Sisyphus counters with his own Arrows of Light, preventing his troops from getting harmed. Aiacos muses that his specter crew is perfection as they are controlled and manipulated by fear and are too frightened by the consequences of betraying their master. His crew remains cold and collected by his words as they manage the ship and tend to Violet, defeated earlier by Leo Regulus.

Aiacos attacks once more with his flames and cannon fire which Tenma repels his Pegasus Ryu Seikun Meteor fist, but the Ship of Hope is still damaged. Aiacos explains that the failure precisely lies with the ship’s instability due to an incompetent crew. Yato is deterred by the words of the Judge and panics, but the souls of the Bronze Saints come to his aid once again telling him that they admired Yato as he always gave his best at the worst times. With newfound hope and trust, Unicorn completely stabilizes the Ship of Hope on his own. Sisyphus announces that the Ship of Hope that he commands is superior if not on equal terms with the Ship of Darkness that Aiacos commands.

The Destruction of the Ship of Darkness

Aiacos, enraged at Sisyphus' claim that the Ship of Hope was superior, creates malevolent flames to consume and destroy the hopes of Athena's Saints. He cloaks himself in his own flames and proceeds to attack the Ship of Hope head-on, hoping to split it in two. Yato changes the course of the ship and narrowly avoids the impact of Aiacos' attack. Sisyphus realizes that the prideful judge wanted to stay in the skies above the battle and take an advantageous position. However, his reckless attack sets the Ship of Darkness aflame.

Angered by the cruelty and nature of the specters' leader, the kind-hearted Sisyphus does not wish to see his enemy suffer at the might of their leader. With determination in the name of Athena, Sisyphus uses the technique: the Momentum of Light Chiron (Chiron the centaur race that gave rise to the myth of Sagittarius), fanning out and extinguishing Aiacos' flames with the pressure of his cosmos. Everyone is astonished by Sisyphus' selflessness in getting rid of all the flames on the battlefield and the specters question why the leader of their enemies had saved them. However, Aiacos expresses no sympathy for his subordinates, comparing his men to animals: workhorses trained to serve their master. All are horrified at the cruelty of the judge, who orders the Ship of Darkness to crash into the Ship of Hope. Upon impact, the Ship of Darkness breaks apart and Aiacos realizes that his once perfect crew is hesitant and calls them pathetic imbeciles. Both ships fall onto the earth, sustaining heavy damages.

Crane Yuzuriha and an injured Leo Regulus observe the crash nearby, concluding that the real fight between Sisyphus and Aiacos will soon unfold. They express worry for Sisyphus, stating that fighting Aiacos unprepared is suicidal. Perched upon cliffs, Aiacos tells Sisyphus that he had rid himself of the burden of his incapable crew.

Sisyphus approaches a boy who watches a tomb next to the Golden Lion Cloth of Leo. Sisyphus expresses that he is looking for the kind, wise and courageous owner of the Golden Lion. However, the boy says that the owner of the cloth had been at the grave for a long time and that he would guard the grave and cloth forever. In this, the boy reveals himself as Regulus and attacks Sisyphus, thinking he wants to take the armor. Sagittarius embraces the boy with the display of his golden wings, showing that he would care for and protect the young Regulus. The flashback comes to a close with Leo Regulus and Crane Yuzuriha wandering toward the battlefield. Tenma and Yato survive the crash of the Ship of Hope.

Sisyphus and Aiacos commence their fight. Aiacos marks an X on the ground, saying that the spot will be the grave of Sisyphus. The Gold Saint Sagittarius shoots a light arrow at Aiacos, who defends himself by using one of his subordinates as a human shield as well as a sacrifice for his next technique. Sisyphus, angered at Aiacos' act of cowardice, is caught off guard by Aiacos' technique: The eyes of the galaxy - Galactic Death Bring. Sisyphus becomes paralyzed, the nerves in his body burn and he coughs up blood. Aiacos proceeds to damage the Saint even further by using Garuda flap to forcibly move Sisyphus to the X on the ground and promises that the rest of the Saints will suffer the same fate. Sagittarius Sisyphus regains control of his body, unleashing a tremendous cosmos vertically into the air, leaving Aiacos' facial expression aghast. The Gold Saint of Sagittarius boldly exclaims that he will not allow the tainted feet of Aiacos to step on the comrades that he is protecting. Aiacos is amazed that Sisyphus still stands after receiving two of his attacks, but the judge unleashes the same attack, Galactic Death Bring, at a stronger magnitude. Though in pain, Sisyphus stands up again with a stronger will to protect the people he cares about, the world and the future. Suddenly, Sisyphus with his own fingers, blinds himself by piercing his eyes. Aiacos thinks the action is in vain since his Death Glare Galactic does not attack the opponent's vision, but rather the brain itself. Sisyphus says the true intention of blinding himself is to heighten the other senses and awaken the eighth sense, the essence of the cosmos. Raising his cosmos to the highest level, he disperses The eyes of the galaxy - Galactic Death Bring. Pegasus Tenma says that his cosmos levels were comparable to that of Virgo Asmita, emitting a warmth that repulsed the judge. Aiacos attacks, but Gold Saint of Sagittarius stops the judge in his tracks with one fist. Aiacos realizes that Sisyphus wasn't fighting with his own power but with the power of his comrades. Sisyphus delivers a single punch, concentrated with the power of the cosmos heightened at the eight sense, directly at Aiacos' chest. Garuda falls from the sky down onto the earth, suffering a fatal blow from Sisyphus.

Because it was he who took Sasha to the shrine,he is the closest to the goddess, and has spent the most time at her side, both in his duty as protector of Athena and personally. 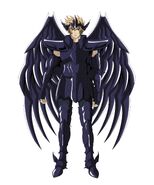