Saint Seiya Episode G (聖闘士星矢EPISODE・G, Seinto Seiya Episōdo Jī) is an ongoing shōnen manga written and illustrated by Megumu Okada. A side-story and a derivative work of Masami Kurumada's Saint Seiya, it first started being serialized in the monthly magazine Champion Red on 19th January 2003 and was later compiled into volumes by Akita Shoten, with the first being published on 19th June 2003.

The story is set in 1979-1980, five years before the events of the original Saint Seiya manga (1985-1990) and seven years after the death of the Sagittarius Gold Saint Aiolos (1972), the brother of Episode G's main character. It takes place in a fictional universe where the Greek gods cyclically reincarnate into the world, often waging war on each other for dominance, and depicts the battle of the Gold Saints, warriors with superhuman powers who fight for Peace and Justice in the name of the Goddess Athena, to protect the Earth from the recently awakened Titan gods.

Saint Seiya Episode G has been translated into various other languages by publishers from around the world, where it was well received, but not without controversy regarding its differences to Saint Seiya. It has been criticized as a "manga in slow motion": during battles, a single hit at the speed of light can often require several pages. Also, the over-detailed drawings by Megumu Okada sometimes make it difficult to distinguish between characters and backgound.

Saint Seiya Episode G it has never been published in English.

Note: in the manga Episode G there are some details, some elements that are not consistent with the original Saint Seiya.

The story of Saint Seiya Episode.G is set in 1979, six years before the events of Masami Kurumada's Saint Seiya (1985), in the same fictional world in which the Greek gods cyclically reincarnate to dispute dominion of Earth. The story revolves around Athena's Saints, humans with superhuman powers who are devoted to the goddess of War, Athena, and whose duty is to protect the world from evil. The protagonist is the Leo Gold Saint Aiolia, who is mistrusted by the rest of the Saints because of the seemingly traitorous actions of his brother Aiolos in the past. In turn, he holds a grudge against the Saints as a whole, and against the elite order of the Gold Saints in particular.

While the Pope, the leader of the Saints, sends Aiolia on mission after mission to prove his loyalty, evil forces manifest that threaten to destroy Sanctuary, the home of the Saints. A modern-day Titanomachy begins as the Titans, ancient gods with a desire for revenge on the Olympian gods, attack Sanctuary to retrieve the "Megas Drepanon", the weapon into which Zeus had sealed their King Kronos in the age of mythology. Their first assault is thwarted by Aiolia, who subsequently gains the attention of the Titans as the "man of the evil omen" who is destined to free their King. With the Titans once again roaming the Earth, all kinds of ancient monsters that the Saints have to deal with are also resurrected worldwide. Meanwhile, the Titans gather their forces to strike at Sanctuary a second time. In the course of their next assault, Kronos is inadvertently released from Zeus's lightning seal by Aiolia's own lightning-based technique, but the god appears to be amnesiac. The Titans determine that it was Aiolia's attack that was responsible for this condition and that the Leo Saint might hold the means to fix it as well. They retreat to their base at the Time Labyrinth and kidnap Aiolia's servant Lithos to lure him there. Aiolia does not hesitate to go to Lithos's aid and, together with five other Gold Saints, initiates a series of battles in which the Titans fall one by one.

Throughout these battles, the primordial god Pontos, who first released the Titans from their imprisonment in Tartarus and initially claimed that he wished to help Kronos, reveals his true intentions, stating that he only revived the Titans as part of a larger plan and has been playing them in order to awaken his true mistress, Gaia, and help her take control of the Earth, destroying gods and humans alike in the process.

At the beginning of each tankobon is a special "gaiden chapter". Initially, these chapters were short side stories, but later on they became just a sort of "introduction summary" of the tankobon itself. The table below lists the Gaiden Chapters independent from the main storyline. They are all set a short time before 1973, the year when Sagittarius Aiolos brought the infant Athena away from the Sanctuary and disappeared.

At the end of the previous Holy War, Aries Shion defeats the last Specters. He then meets Libra Doko, who says that the cosmos of the dead Saints will reincarnate in the next generation of Saints.

Gemini Saga fights a group of evil ghosts who invaded his House. The last ghosts asks him: "Who are you", but Saga is unable to find an answer.

Sagittarius Aiolos fights a band of warriors devoted to the Egyptian sun goddess Apophis. This story is a prologue to Aiolos-Hen.

The works to build the dam of Assuan (Egypt) revealed a very ancient tomb. The Sanctuary sends Sagittarius Aiolos to investigate. He finds that Ichor fills the tomb and Egyptian deities and creatures are coming back to life. After he wins against Apophis, he leaves the tomb together with a child Leo Aiolia and the archaeologist Miko Hasegawa. The ichor is the godly blood of Pontos, who comes back to life and start plotting against Athena's Sanctuary.

Galan tried to steal Athena's ichor. He is caught and imprisoned. The penalty is to fight to death against a Gold Saint. Galan asks to fight his friend and trainer Sagittarius Aiolos. In the battle he loses an eye and an arm, but his life is spared.

Kanon had been imprisoned by his brother Gemini Saga. He gets free through a secret passage to the sea bottom. There, he releases Poseidon, he dons the Sea Dragon scale and starts plotting against Athena's Sanctuary.

In 1973, Gemini Saga tries to kill the infant Athena, but the goddess is saved by Sagittarius Aiolos.

Part I: the Sanctuary

This section is a stub.

In the second part of the series, three events change drastically the direction of the plot. First, all the Titans are freed from their prisons in the Tartarus. Second, as soon as he freed them all, Pontos suddenly leaves the Titans and reveals (to the reader only) his true allegiance to Gaea. Third, the Titans change strategy: they stop attacking the Sanctuary and the Gold Saint; instead, they kidnap Lithos, thus forcing the Gold Saints to come in the Tartarus to continue the holy war.

This section is a stub.

In the last part of the series, extreme events change drastically the direction of the plot. First, the Gold Saints manage to meet and save Lithos Crysallis. Second, now all the eleven Titans either are dead or they changed side to follow Pontos and Gaea. Chronos is left alone to face six Gold Saints.

The series ending is open: Pontos and the other followers of Gaea leave the scene to complete the liberation of the Goddess their mother. Another series should follow to tell the battle between Athena and Gaea.

Sort the table by "opponents" to see the relevance of each character in the series.

Sorted in the same order as they were defeated. At the end of the series, some of the surviving Titans betrayed Chronos and became followers of Gea.

Sorted in the same order as they were defeated.

Other followers of the Titans

Characters of the Gaiden Chapters

Followers of Athena or related to them: 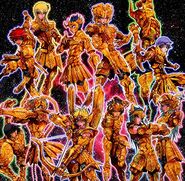 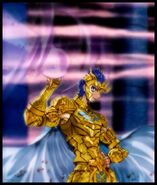 Granpope
Add a photo to this gallery 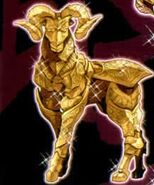 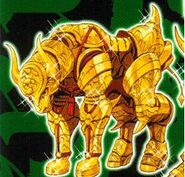 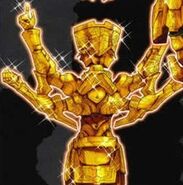 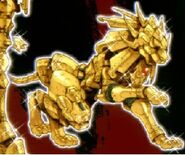 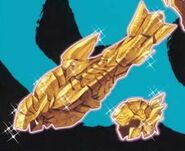 Piscis Cloth
Add a photo to this gallery

Lynx Retsu
Add a photo to this gallery 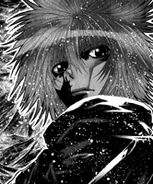 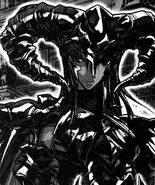 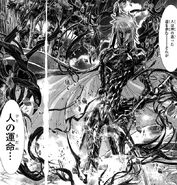 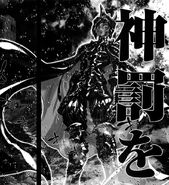 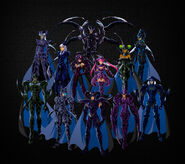 Titans
Add a photo to this gallery 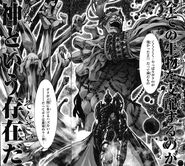 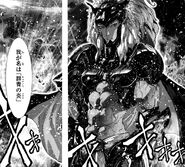 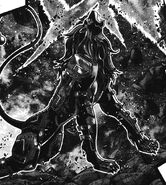 Margarites Drakon (Pearl Dragon)
Add a photo to this gallery 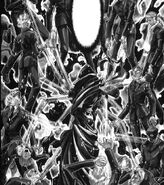 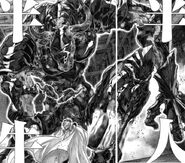 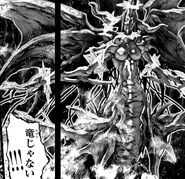 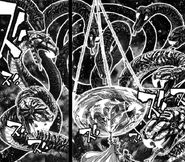 Salamander
Add a photo to this gallery
Retrieved from "https://saintseiya.fandom.com/wiki/Saint_Seiya:_Episode_G?oldid=53343"
Community content is available under CC-BY-SA unless otherwise noted.