Scorpio Milo (蠍座のミロ, Sukōpion no Miro) is one of the Gold Saints. He is the guardian of the 8th House in the Sanctuary, the Scorpius Temple.

Milo is the Scorpius Gold Saint. Since his main technique inflicts immense pain to its victims, Milo always gives his opponents the option to either surrender, or become insane due to the unbearable pain. He also sees great importance in the pride of the Gold Saints and seems to be always ready to clean the name of his companions. Even so, he is a noble warrior who can admit defeat even against a weaker or inferior enemy. Since Milo fought Hyoga, he spoke to Aquarius Camus in a way that led the fans to believe they were close friends. Apparently, this was made official since the anime adaptation of the Hades arc of the manga included more interaction between them and they are depicted as friends in Saint Seiya Episode G.

Milo became a Gold Saint at an early age. He had already been granted the Gold Saint status and the Scorpius Gold Cloth by the time he was 7 years old.

He first appears when Leo Aiolia  fights against Lithos’ father, Milo crosses Virgo's house to protect Leo and was left unprotected, but not to meet with Aioria precisely. After the meeting, he appears in Golden where he discusses with other saints on Aioria. He then appears much later, to protect Aiolia when resting after the fight against the Titan, although he didn't like the idea at all. There he faces Hector, a hero of the Trojan War revived by Pontos, Milo manages to overcome him without major problems with his Scarlet Needle. During the battle against Kronos, the Titan releases three giants: Hoplisma nephritis (Jade Armor) and Margarites Drakon (Pearl Dragon). One of the beasts attacks Aiolia but Taurus Aldebaran protects Leo. The beast then attacks with fire. Aiolia and Aldebaran protects and sacrifice his body for the attack, but Shura destroys the attack with his Excallibur . The dragon's attacks with needles of water but Aquarius Camus saves with Diamond Dust and the giant Nephritis attacks and seems to be the end of them and this time Virgo Shaka saves.

Milo attacks giants and this causes the three giants to be released on them asks Aioria and Aldebaran launch it on them. Aldebaran throws Aioria who uses his Lightning Voltage to fulfill the promise he made ​​to Kronos and Hyperion . Cronos see Aioria to achieve and teases Leo's wishes.

For a change we have a discussion on the grounds of both Milo and Camus by Athena and his comrades, after a talk is ready for battle against Margarites Drakon (Pearl Dragon). Milo attacks the giant whilst protects Camus from the giants and noted that the speed of this beast is amazing. Camus has discovered that in fact the magic dragon is protected a barrier. Camus came up with a plan to break that barrier with Milo's Scarlet Needle.

The dragon attacks Camus with immense water pressure. Camus withstands the attack with Ice Coffin. The beast still continued its deadly offensive and Camus freezes its dunamis to protect Milo who attack with stylus with cosmos raised to the maximum. Milo attacks with his Scarlet Needle Antares followed. Without suspecting what Camus dragon attacks him with his Aurora Execution. And after freezing destroys Milo definitely.

In the official sequel Saint Seiya Next Dimension, Milo appears (together with the other Gold Saints) in the form of spirit to help of Athena.

Milo is first seen at the Scorpius Temple, where he confronted Pegasus Seiya and Dragon Shiryu. The two Bronze Saints were no match for Milo's power. First they were set back by his Restriction, and then injured by his Scarlet Needle. However, Hyoga came before Seiya and Shiryu could start to fight.

Milo attacked Hyoga with his Restriction technique, although it had no effect in the Cygnus Saint because Hyoga's body was being protected by ice. After his first attack was ineffective, Milo attacked with Scarlet Needle, Hyoga could do nothing against Milo's speed, and after almost all his attacks failed to injure the Gold Saint, a nearly senseless Hyoga awakened his seventh sense and launched an Aurora Thunder Attack on Milo. At the same time, Milo attacked Hyoga with the last Scarlet Needle, Antares. Hyoga dropped to the floor after he received Antares. Looking down at Hyoga, Milo saw that he was trying to crawl to the next House. After seeing this, the Gold Saint realized that Hyoga's attack had frozen his Gold Cloth in the fifteen places that corresponded to the stars of Scorpio, which meant Hyoga had hit him just as he received Antares, and if he had not been wearing his Gold Cloth, he would probably have died first. Milo admitted his defeat, and after he stopped Hyoga's bleeding, he allowed him to go to the next House. After the battle in the Twelve Houses ended, to atone for his actions, Milo used his own blood to repair the Cygnus Cloth.

When both of them had lost the will to fight, Cygnus Hyoga, along with an unconscious Andromeda Shun, arrived at the Scorpius House where he challenged the Gold Saint.

Eris and Heated Battle of the Gods

Legend of Crimson Youth and Warriors of the Final Holy Battle

In the Hades Arc, Milo is shown at the Pope hall talking with Athena, she tells him that a Saint has come to the Sanctuary, in order to help them defeat Hades. After this revelation, Milo decides to return to the Scorpius House to watch over it. However, as he exits, a cosmos attack arrives at the Hall and injures the new arrived Saint. At that moment, Milo realizes that the new saint is none other than Gemini Kanon. Angered, the Gold Saint demands to Kanon to leave the Sanctuary, after Kanon refuses, Milo attacks him with his Scarlet Needle. Due to the commotion, Athena enters the room and is horrified after seeing the scene. She begs Milo to stop and tells him that Kanon is now their friend and that she has forgiven him. However, Milo only responds that even if she has forgiven Kanon, all the other Saints would never forgive Kanon after what he had done as the Sea Dragon General. Kanon urged Milo to finish his attack for he would not leave even if he became crazy or died, Milo attacked Kanon with Antares. After he finished, Kanon fell into a bloody mess in the ground. Milo apologized to Athena and walked to the exit, but before he could exit, Kanon rose and asked him if he would leave Athena with an enemy, to which Milo only replied that in that room there was no enemy, only a fellow Gold Saint, Gemini Kanon. After Milo finally returned to the Scorpius house, Kanon told Athena that Milo had only been testing his loyalty, and that the last attack was not Antares, but a fake hit which stopped his hemorrhage (similar to what he did to cure Hyoga in the Sanctuary Arc).

Later in the Arc, he arrived to the Virgo House to finally stop Gemini Saga, Aquarius Camus, and Capricorn Shura after they have killed Virgo Shaka using the forbidden technique, Athena Exclamation. Milo attacked the three former Gold Saints using 14 of his Scarlet Needles on each one of them, but when he was going to use Antares, Saga attacked him by using his Galaxian Explosion technique. The three spectres threatened to kill all the Saints present at the Virgo House using once more the Athena Exclamation. Scorpio Milo, Aries Mu, and Leo Aiolia prepared to attack the spectres with the same technique. The two groups unleashed the Athena Exclamation and instantly the infinite power destroyed the Virgo House. The power of the two attacks was so even that they did not move at all. Eventually, the combined power of these two attacks was deflected by Dragon Shiryu (in the anime, it was by the combined power of all 4 Bronze Saints). Athena beckons the two parties to stop fighting and come to the Pope Hall. Athena tells the fallen Gold Saints that they no longer have to suffer and commits suicide (secretly invoking the 8th sense as told by Virgo Shaka in the petals he sent her).

When Mu, Aiolia and Milo arrived to Hades' castle, they faced Wyvern Rhadamanthys, one of the three Judges of Hell. To their shock, Rhadamanthys easily overpowers the three of them, because Hades' castle is under his will and cosmo - all Saints have their power reduced to 1/10th. Even after receiving their combined attacks, he defeats all three of them easily using his Greatest Caution technique, and throws them into the abyss to Hell. When Seiya was cast into the frozen Hell where those who dare to defy the gods are kept, he saw Mu, Aiolia and Milo trapped in there as well, apparently dead. However, upon Athena's arrival to Hell, they were revived by her power, and broke free. The three arrived to the Wailing Wall, the gateway to Elysion, where Virgo Shaka and Libra Dohko had already arrived before. Milo using a Libra nunchaku attempted to break the Wailing Wall along with the other Gold Saints, who also wielded Libra Weapons. However, they failed and eventually they had to gather all 12 Gold Cloths and Saints, to sacrifice themselves to open this gateway, and allow the Bronze Saints to reach Elysion - the paradise of the Gods - the true home of Hades.

Milo had mastered the 7th sense, so he is able to move freely at the speed of light. It is also implied that he reached the 8th sense to wake up in Cocytos. His fighting style seems to rely upon quick movements. His secret techniques are:

Milo's guardian constellation is Scorpius, and his Gold Cloth represents it and its associated myth : The scorpion Apollo or Gaea sent to kill the fabled hunter Orion.

The temple he guarded was known both in manga and the anime adaptation as Ten Katsu Kyuu (天蠍宮), the "Temple of the Celestial Scorpion". 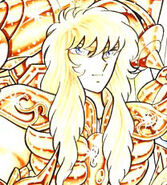 Scorpio Milo in Soul of Gold

KotZ (Netflix Series) Scorpio Milo with the other 9 Golden Knights

KotZ (Netflix Series) Scorpio Milo is talking to the Evil Pope, Ares
Add a photo to this gallery

Retrieved from "https://saintseiya.fandom.com/wiki/Scorpio_Milo?oldid=53619"
Community content is available under CC-BY-SA unless otherwise noted.