Jabu is one of the 100 orphans that were sent by Mitsumasa Kido all over the world to train and bring back the Saints Cloths in order to protect his foster granddaughter, Saori Kido (Athena). When Jabu was just a kid, he was very obedient to Saori, even if she wanted him to become her horse. He even offered himself after Seiya blatantly refused to do so.

Jabu later returned to Japan to participate in Saori Kido's Galaxian Wars, a tournament to get the Sagittarius Gold Cloth, also he wanted a chance to fight his old rival, Seiya (now the Pegasus Saint). Jabu win the first round against Lionet Ban, but during his second round Andromeda Shun had the upper hand over him, however, their fight was interrupted as Phoenix Ikki showed up and stole the Sagittarius Cloth, so the Galaxian Wars was put on hold till the Sagittarius Cloth was returned.

After that, Jabu "retired", supposedly to re-train and repair his cloth after the battle with Andromeda Shun. He appeared again in Sanctuary to protect Athena while Seiya and other four main bronze saints (Dragon Shiryu, Cygnus Hyoga, Andromeda Shun, Phoenix Ikki) were fighting the Gold Saints.

Jabu and other Bronze Saints warn Saori about the defeat of Aldebaran and end up fighting against Mizar Zeta Syd to save her, but without cloths they are partially defeated, and saved by Seiya.

Jabu remained guarding the Sanctuary, like other minor Bronze Saints.

Toward the end of the series Jabu became one of the guardians of the Sanctuary, as Hades' power awoke the dead saints and attacked the guards. Jabu stepped in and fought some of the Specters (see below) and later at the end of the Hades series he also helped defend Seika, Seiya's sister, against Thanatos' attempts to kill her.

In the Tenkai-Hen feature movie, one of the most controversial things took place: Jabu abandoned Athena to serve Artemis, without any great sort of remorse. Seeing as Jabu was one of the most loyal to Athena even since her childhood in the Kido mansion, that caused quite the controversy among fans.

As a result of his "treachery", Jabu came to attack Pegasus Seiya with Ichi, but only succeeded in revealing the location of the Pegasus Cloth.

Jabu wearing the second version of his Unicorn Cloth 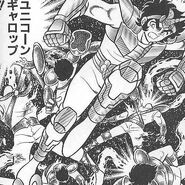 Netflix KotZ Unicorn Jabu with the other Bronze Knights
Add a photo to this gallery
Retrieved from "https://saintseiya.fandom.com/wiki/Unicorn_Jabu?oldid=54109"
Community content is available under CC-BY-SA unless otherwise noted.